You are here: Home / Entertainment / Celebrity / Why Is Body Shaming Still Happening?

It’s nothing new. It happens in the media, in the workplace, at schools and even just on the street. It happens to grown women, teenaged girls and even school-aged girls.

And I just keep wondering when it will stop. When will we reach a point when we can turn on our phones, laptops and tablets and not see articles tearing down women based on their bodies?

This weekend singer/songwriter Pink posted a photo of herself with her daughter Willow to Twitter.

Willow said to me the other day whilst grabbing my belly-“mama-why r u so squishy?”And I said..”b/cuz I’m happy baby” pic.twitter.com/69wuVHg6QM

And the internet decided to spew its normal vitriol all over this beautiful family moment. “Fat” was the word of choice to describe Pink (which—when looking at this photo—is mind boggling in my opinion). Pink basically owned the internet with her response.

She posted another photo of her, happy, with her husband, responded not to the haters as much as those that supported her and tweeted this great message of self-acceptance and self-love:

I think it is great that Pink stood up and told the world to back off. But I hate that she had to do it all. Why should she have to justify her body to anyone? Why should Kelly Clarkson have to defend her post-baby weight gain to the world? Why does Mindy Kaling have to fend off back-handed compliments about how she dresses? Why should professional women/pregnant women/stay-at-home moms/teenagers/any woman anywhere have to feel that their bodies are under constant judgement?

And not that it should even matter, but studies have shown that negative reinforcement like body shaming often has the opposite effect. It can translate into negative physical and mental health and has been known to trigger eating disorders or depression. Still, this kind of negative behaviour seems to be wide spread and, often times, acceptable.

Thank goodness for women like Pink, Kelly Clarkson, Mindy Kaling and Kristen Bell who have a strong voice and use it to shut the haters down. If only society could move beyond hearing their voices and start to actually understand their words.

We put enough pressure on ourselves to be perfect all the time, we hardly need to get it from the rest of the world, or worse, from each other.

So the next time you think about commenting on what a friend is eating, her exercising habits or the latest diet fad you think she should try, just don’t. Instead, why not give her a compliment that has nothing to do with how she looks?

As Kristen Bell said in a 2013 interview with Redbook, “I am not a woman whose self-worth comes from her dress size” as we all should be. 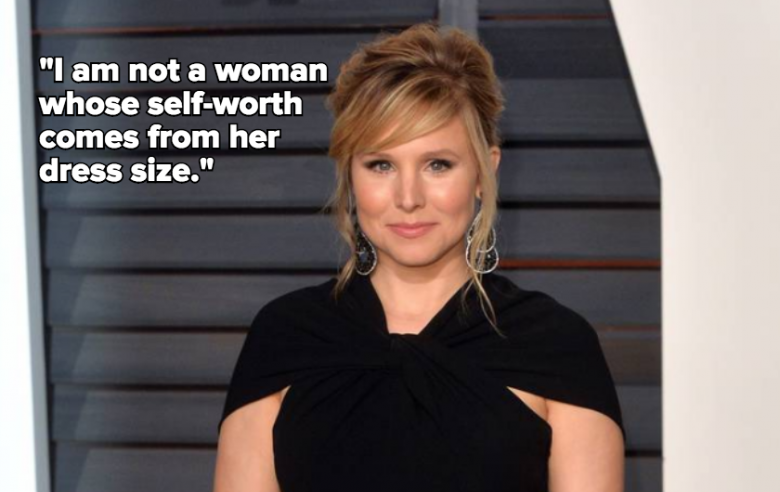