You are here: Home / Life / Design/Decor / Where the Best Parties Begin

There’s nothing like getting together with family and friends, especially when you’re celebrating the holidays or a big event like the Superbowl, Olympics or even an Oscar party. Bringing loved ones together to share a special occasion and a special meal is what memories are made of, after all.

Renovations are not for the faint of heart, and kitchen renovations especially.

And that’s probably what I love most about my new kitchen. Yes, it was hard (okay: very hard) getting here. Renovations are not for the faint of heart, and kitchen renovations especially. But the reward after all the hard work and hardship has been immeasurable! Our family has gone from living in a small home with no open concept and a kitchen that could hardly accommodate three people, never mind a party to a home built for entertaining where the kitchen island is the beating heart of it all. 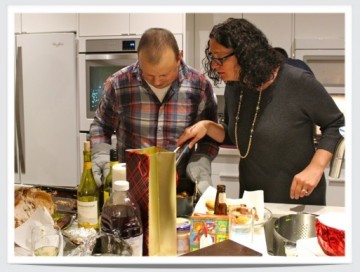 Tearing down walls and creating an open concept plan allowed us to put a large kitchen island in the very heart of our home. Filling that kitchen with incredible appliances has permitted us the luxury of throwing parties on a scale we could never have dreamt of before. And it has been worth every bit of time, money and effort.

When we installed two Whirlpool White Ice ovens in our kitchen (one with convection), friends and family raised a few eyebrows; and perhaps with some justification. But within weeks of moving back into our home, we had mastered our new cookers and were able to produce a Christmas turkey that could bring tears to your eyes, while simultaneously providing space and a much higher temperature to my brother-in-law to make his famous roasted potatoes. 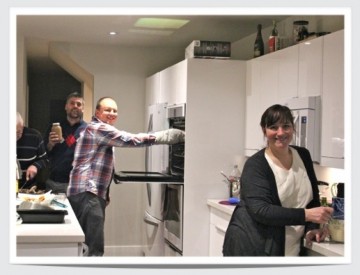 We were able to bring both dishes to the table on time and piping hot – no worries about letting the turkey get too cold while waiting for the heat to crank up enough to give a gorgeous golden crisp to the edges of the potatoes. And that’s just the ovens: in the meantime, our Whirlpool White Ice gas range was busy with various pots and pans on boil, simmer or sauté. 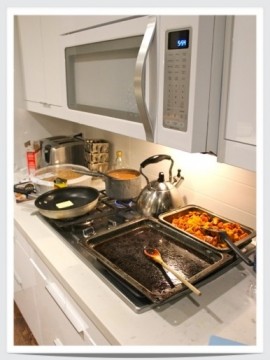 Probably the best part of having such a vibrant and effective kitchen is that everyone wanted to be there.

Probably the best part of having such a vibrant and effective kitchen is that everyone wanted to be there. At points there were three or four chefs helping with various tasks, and the kids were constantly in and out refreshing their beverages. The Whirlpool IceWhite refrigerator with French Doors turned out to be one of the best appliances, because the exterior water and ice dispenser not only allowed but encouraged the children to drink lots of water.

It’s almost become a cliché that eventually all good parties will migrate to the kitchen, but when you have a kitchen that’s laid out well and excellently appointed, the party doesn’t just end there; it begins there.

So here’s to good food and even better memories, and many, many more kitchen parties in the future. Cheers!

This post was sponsored by Whirlpool. All experiences and opinions are my own.