You are here: Home / Life / Home / When A Fire Lit Up My Blessings 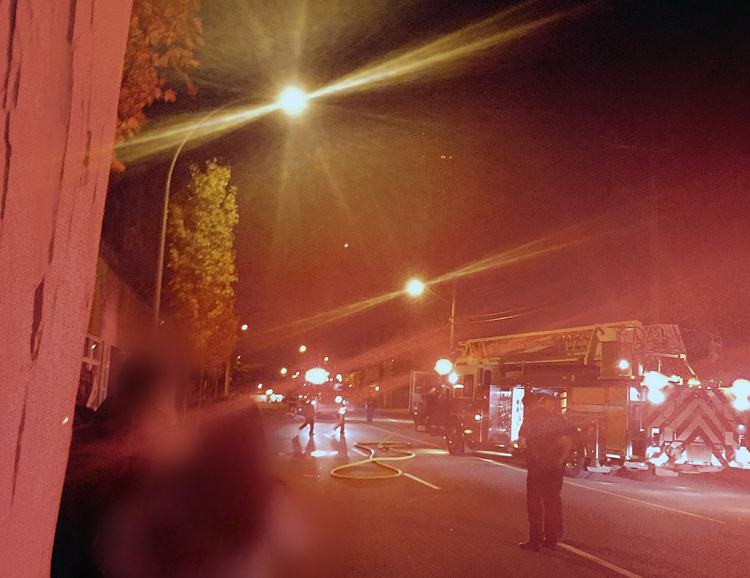 It can be really hard to be thankful. Life is busy, stressful and often inconvenient. It can be hard to see just how much we have to be thankful for in the day to day bustle of living our lives. How you see things is so dependent on the light with which you look at them. All my blessings were illuminated Sunday morning by an unexpected light – a burning apartment below us.

It was 3:30 am and we were fast asleep. The piercing blare of the fire alarm broke the early morning silence. It was insistent and incredibly loud. I thought it might be a false alarm but I could hear my neighbour yelling “There’s a fire on the third floor, we have to get out NOW!” God bless that man. We sprung into action.

My son came into my room and announced “We did a fire drill at school last week! I know exactly what to do!” I told him to get his shoes on and I crammed my feet into shoes by the door and we made our way down the hall. We hurried down the stairs along with our neighbours, folks we nod to in the parking garage and make small talk with about how long term a commitment it is to wait for an elevator. We were all taking the stairs today!

We stood outside on the parking lot and the sidewalks watching the fire trucks, police and even the local paper arrive. The firefighters went in and made sure everyone was out. We watched them douse the flames quickly and inspect the building to ensure it was safe for us to go home.

Home was a word that felt foreign on my lips. This apartment was really always intended to be temporary but we’ve been here two years. We’ve filled it with stuff – so much stuff. It seems every season we are downsizing and bringing things down to the thrift store. You would think eventually it would run out, but it accumulates again. Shivering outside watching the apartment below ours burn, I realized that stuff didn’t matter.

I watched this romantic comedy called Leap Year and it talked about what you would grab in case of emergency, if you only had thirty seconds to go. When our thirty seconds came around, I grabbed my family. My precious little boy and my handsome boyfriend (and my purse, because my family likes coffee and I thought we might need some). I forgot my keys (and the cats). I could smell the smoke and my kid is asthmatic so we didn’t even have time to grab them. But we were safe and so were they and that’s what matters.

When the fire department cleared us to go back in, it was time for my boyfriend to go to work. My son and I laid together in my bed with a giant dog stuffy and some apple juice boxes. Life is always so busy, but on Sunday morning it just stopped for a while. In the aftermath, I was on my phone letting folks know we were alright. By the glow of my smart phone in the post-crisis exhaustion, I surveyed my sweetest blessing and realized I have everything I need. I just had to look at it in the light. My heart was racing, but it’s never felt so full of blessings.

Is your family ready in the event of an emergency? When was the last time you had a fire drill?