You are here: Home / Life / Holidays / A Couple of Carvers

There are so many things about parenthood that irk me. And I know that I will miss those things when my kids grow up.
The toys scattered throughout the house. The printing on the walls. The fingerprints on the windows.
One thing I know I won’t miss is carving a pumpkin at Halloween. I absolutely hate carving pumpkins and I feel like I take one for the team each year. In my 17 years with Sean, he has yet to touch a pumpkin.

While, literally, up to my elbows in one of this years pumpkins I asked Eva when she thinks she’d like to carve her own. She said probably when she was 12.
**sigh** Six more years.

Cam carved his own pumpkin for the first time last year.
I was hoping he would be carving his own again this year, but the weather was great and there was a street full of his friends playing road hockey, so I wasn’t holding out hope that he’d be of any use this year.
Until he walked in the house and said “Which one is mine? Can I carve it now?”
I handed him the carving tool and hugged him.

I went to wash the pumpkin guts off of my hand and arms. When I returned I found a sight to behold. 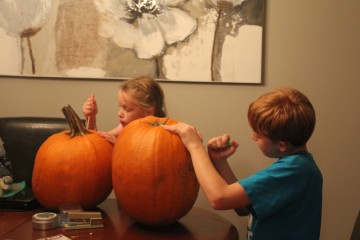 They were both carving a pumpkin.
That’s TWO pumpkins I did not have to carve.
Sweet relief! Finally I am not responsible for all of the pumpkin carving in this house.

The third pumpkin? I took the easy way out and grabbed the drill and some drill bits.

I am utterly impressed by their pumpkin carving skills. 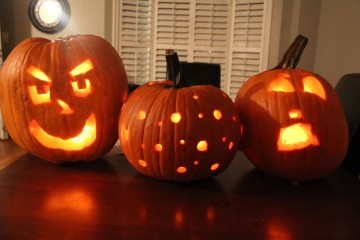 Next year I am buying only two pumpkins with the hopes that my carving days are over.
I’d love that.

Does anybody else loathe carving pumpkins?