You are here: Home / Life / Politics: Why You Should Care

It’s municipal election time here in Alberta, which means all kinds of fun and games in the race for mayor, city council and school board trustee. And before you ask, yes: there are people running against our immensely popular mayor, Naheed Nenshi. To be specific, there are eight people seemingly crazy enough to run against The Nenshi, and that’s not even the exciting race to pay attention to in this year’s election. So far in this campaign, the candidates for public school board trustee have gotten more media attention than those running for councillor or mayor, and that’s kind of cool.

Here are an few reasons why: 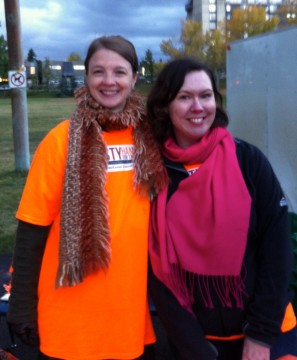 I happen to know one of the candidates for public school board trustee in this year’s election, and even though I can’t vote for her specifically (I don’t live in her ward), I have been offering my services as a volunteer for her campaign. This evening I grabbed my youngest and her friend and headed down to a community farmer’s market to help hand out flyers for a short time. As we were leaving the house, my girl (who is all of 10 years old and obviously wiser than her years) asked me, “why are you volunteering for this lady? Is it because she’s your friend or because you like her policies?”

Good question, kiddo! Keep up the good work with that critical thinking and you’ll make a fine and thoughtful citizen. And I will consider my job as a parent well-done.

Creating a better future through education benefits everyone, not just children in schools.

My answer? “I’m supporting her because I believe in her platform… but I don’t think I would be friends with someone if I disagreed with their policies.” Which is true. We’re attracted to those who share the same priorities and values in life, and even though I value diversity and respect the rights of others to have different opinions, I find that in my friendships I gravitate towards people who have similar beliefs.

And so tonight, for the first time since 1991 (when I ran for Vice President of the Arts and Science Undergraduate Society at my alma mater, Queen’s University) I was actively involved in an election. (My running mate and I lost that election, incidentally, by a very small margin. I was guiltily relieved at the result.)

And here’s the thing about it: getting out there and supporting a candidate I believe in… it was awesome. To mix and mingle with people in a community – people who were interested and engaged – was exhilarating. And to hear my friend Misty share her priorities and vision with constituents – to see her commitment and passion for making a good public education system even better? That was the best part. 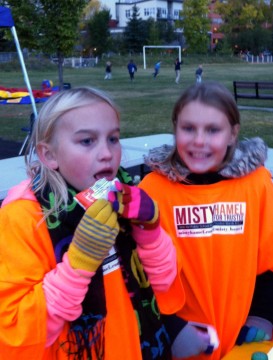 My girl and her friend walked the grounds of the market sporting Misty’s un-missable bright orange t-shirts, helping spread awareness and learning at an early age that getting involved in politics at the grassroots level is a really cool thing to do. I’ve always brought my daughters with me to the polling station on every election day, even letting them come into the polling booth with me. I’ve explained to them why voting is not only a right but a responsibility, and that it’s not okay not to vote, no matter how discouraging the political landscape can seem at times. I’ve taught them it’s equally important to research each candidate’s platform and to weigh the merits of each platform against your own values before you decide how to vote. But most of all: vote.

But words are just words. Tonight was a chance for me to put my money where my mouth is and actually get involved in supporting a candidate I believe in. I think this experience will be an important one for my daughter. I hope she keeps on asking the tough questions, and that she continues to get involved in politics, and that maybe she’ll influence some of her friends, and maybe more young people will care enough to vote.

Because democracy is cool, yo.