You are here: Home / Life / Furnishing / One Man’s Trash is Another Man’s Fire Pit 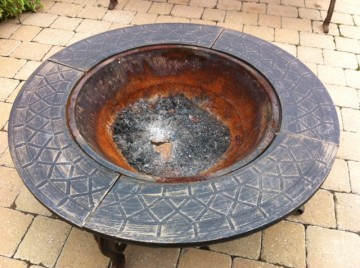 I have been accused (and justifiably so) of being cheap, or as I like to say… frugal. I can’t help it, I hate spending money unless I have to. I don’t even know where it comes from, we never lived an extravagant life but we didn’t pinch pennies either. My parents spending habits were right down the middle, considering they grew up in Britain during the war, and didn’t have outdoor plumbing.

When it comes down to it, if I can save a dollar I’ll take it. Funny enough, I don’t chintz out on my family nor do I expect them to be like me; I’m not that cheap when it comes to my wife and kids. I, on the other hand, often take the cheap route if I can, it’s nothing crazy. For example, when we go out to eat, they’re free to get what they want, but if there is a nightly special, I’ll get it even if don’t really want it. One night my meal came with a free coconut cream pie and I ate it even though I hate coconut.

I’ll give you other real life examples: (Although many of these I have outgrown and strictly did in my youth.)

-Watered down my milk

-Bring my own lunch to work

-Do laundry on off times

-Tell the kids the car wash is a water park

So with all that being said, with me being cheap for 37 years, it’s surprising that I have never combed the neighborhood on “junk day”… that is until now.

For years I’ve seen people driving around the streets scoping out the bottom of people’s driveways for decent “junk” on garbage day. I’ve seen most of my own stuff get taken away well before the garbage truck takes it. Things like old BBQs, bed frames, dressers, and such, always gets snatched up by the thrifty and creative people before it even touches the driveway. I have always admired the people who make money off of scrap metal or fix up an old BBQ. I just don’t know where to start, but ya gotta start somewhere. The other day, I decided to go on a treasure hunt. I drove around the neighbourhood in minivan and was determined to find something. I was convinced I was going to turn someone’s old junk into my treasure and fortunately I hit jackpot pretty early. Within 10 minutes, I was driving home my new fire pit. I was pumped. It’s a dream come true, I have wanted one forever, and it cost me $0 dollars.

You can tell I’m a rookie though. I even knocked on the woman’s door to ask if I could take it. I was pretty sure it wasn’t on the end of her driveway on junk day by fluke, but I still wanted to double check. The only problem was that it had a small hole in it. I just need to get a fire grate or patch it up, give it a fresh coat of paint and before you know it and the kids and I will be roasting marshmallows. Anyone know if marshmallows are on sale this week?