You are here: Home / Life / News Stories / That’s Not My Milton: In Defense Of Canada’s Fastest Growing Town

About a month ago, I pitched a blog to my editor about what it is like to live in the fastest growing community in Canada. Holiday season and parenthood have gotten in the way and it’s taken me longer to get around to it than I’d planned. Turns out that was a good thing.

Earlier this week, a Globe and Mail piece by Caroline Alphonso published a pretty scathing article about this very topic. The article, titled “In Milton, Ont., crowded classrooms put Canada’s fastest-growing town to the test,” talked about how “this Toronto-area community’s frictions over staggering population growth and shifting demographics are playing out in microcosm in the region’s overcrowded schools.”

It was a pretty shocking piece that detailed in black and white what it’s like to be in a community that has grown from 30,000 residents to almost 130,000 in 15 years. According to the Globe, our student population has increased by 160 % over the last decade; no surprise to many of us residents with school-age kids. The story paints a picture of racial divides (owing in large part to the incredible multiculturalism that now exists in a town that was once pretty much exclusively Anglo-Saxon). It suggested a divided community, at odds with itself, with zero sense of community and a serious sense of anger at “New Miltonians” coming in and destroying everything.

I’ve been living here for four years now. I am proud of this community and stand by the hundreds of people in various local Facebook groups who expressed outrage at the way this article depicted us, our town, and our community. So now I’m going to write my blog (350 words later). I’m going to say what I planned to, to set the record straight about what it’s REALLY like to live in a town where the average age is 12 and elementary schools open with 19 portables ready to accept the immediate overflow. I will share the good, the bad, and the ugly. Because unlike the reporter who didn’t bother to investigate the true community here, I am actually a part of it.

I am not naïve to the downside of being in such an overburdened community. Infrastructure can’t keep up with the demand, and the powers that be see it fit to pass out building permits like candy. Just like in Toronto, we get our kids into swim class by the skin of our teeth, waking up the second the courses go online to snatch up a spot. We’re not immune to that.

Our schools have green space taken up by portable upon portable. When my daughter was in JK, she was in one of fourteen kindie classes. Boundary reviews happen so often, my friend Lisa (quoted in the Globe’s story) had her daughter in one school for JK, another for SK and yet another for grade 1. Kids are not supposed to be moved around as much as her daughter was, but it does happen and it is less than ideal. It affects a child’s ability to make long-term friends who they can say they’ve gone to school with since the first days. 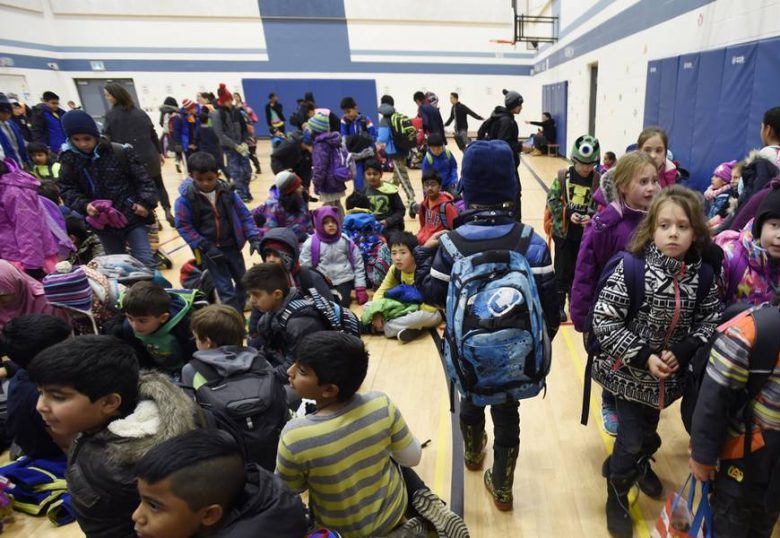 Image via Globe and Mail

Such is the reality of new communities and new schools opening to accommodate them, necessitating a constant review of what kids will go where. It is a downside. It is a huge downside of living in a community that grows by hectares every year.

The story spoke of the ethnic diversity here as if it’s the worst thing that could happen to us. Meanwhile, this diversity has meant that my daughter’s class is learning what a dreidel is and getting henna at Eid. Personally, I think that’s pretty amazing.

You know what else a community with an insane number of kids means? It means there is a massive community of people in this town who are in the same stage of life. I made more friends in this town in my first three months than I did in the previous five years elsewhere. It means throngs of people joining groups in town seeking support and recommendations and ideas. It means that groups like “the Milton Elf,” which seeks to help people going through rough times, are created to give people in our community brighter days.

It means when one family is in pain, the community rallies in epic fashion (over 1,400 people from the town showed up to one particular fair) to support them.

This town is far from perfect. We don’t all get along. There is no question we have racism here, like every other town where there is significant ethnic diversity. We all live in a town where we can feel the growing pains of too many kids and not enough schools, and a town that over and over again approves buildings and communities that should wait to be built until we stop busting at the seams. We feel that. We don’t deny that. But we also feel the support. We also know that, while problems exist, so does a community that cares, not just about the perception of who we are, but about maintaining that semblance of community.

So, yes Caroline Alphonso, we are an imperfect town, struggling to manage the incredible burden that is being placed on us to adjust to the ongoing intense and rapid change. We are surfing and we might have our arms flailing trying to stand up, but we are not a broken community with no soul, divided along race lines about to get dragged under the riptide any minute. That is not who we are.

We are an imperfect family with growing pains. Not everyone is thrilled with the growth. Many people have left town because of it. Lisa is moving because the price of accommodating her new family of five in a larger home is too expensive now because, everyone wants to live in Milton. And they don’t just want to live here because it’s still somewhat affordable and in close enough proximity to the city. People want to live here because at our core, we are a caring, genuine community, in spite of our size and because of our ethnic diversity.