I have let myself go over the past few years. I am way too heavy for a guy that stands at a very intimidating 5’6. I swear I am slowly turning into a sphere. My whole life I have been up and down in weight, unfortunately, more up than down.

Here is how the last 20 years have gone.

In my early 30’s: overweight

You can make a million excuses so I will. Nah, I won’t do that but it’s tough to be disciplined when you have work and kids. It’s hard to find the time to take out the garbage never mind hitting the treadmill or banging out a bunch of crunches. It’s not just the physical exercise, or lack thereof, it’s also the evening snacks that are a killer. I know in that window of time, after putting the kid’s down and before our own bedtime, I should be doing pushups but dill pickle popcorn is so much more fun.

So what do you do? How do you lose weight with a busy life of work and kids? I have come up with a solution, I can’t make any promises that it will work because I’m only a few days into my regime but I’m trying. I thought why not integrate playing with the kids with exercise. The boys and I get into a lot of roughhousing. So if I’m crawling along on the ground why not lift the kids up and down while I’m at it?

I’ll admit I’m no Tony Little or legendary Jack LaLanne, but at least it’s something and the kids get a kick out of it. 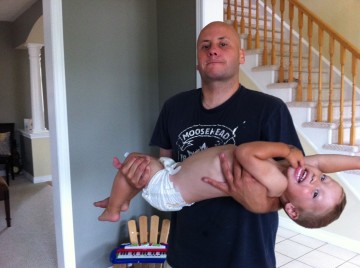 I use Rory for doing bicep curls. I typically to 3 sets of 10. He weighs in at 29 pounds so I’m proud that I can do that many. He’s better than actual weights on so many levels; I mean how many times has a set of dumbbells sang twinkle twinkle little star when you’re in the middle of your second set? 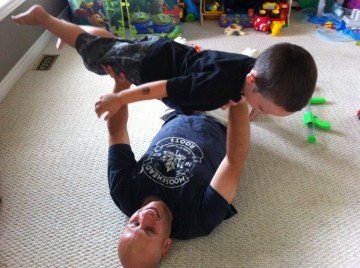 I use Travis for bench press. Again I do 3 sets of 10. He weighs in at 33 pounds and is the perfect size and weight for working out your pectorals major muscle as well as other supporting muscles like the anterior deltoids, trapezii, and the triceps (yep, I looked that up).

This is the way to go for sure. I’m all set. Now let’s just see if I start getting in better shape. Heck I have to do something and I figure no better time than now right? It’s not because I’m super motivated but because when they hit 50lbs, they’ll be too heavy. I’ll end up doing squat rather than doing squats.