You are here: Home / Life / Finance / The Hardest Lesson!

Do you remember when you first realized how expensive things are? I’ve been racking my brain to remember but I honestly can’t. Well. Will won’t have that problem. He’ll have this blog to remember the day he did.

I decided last week to establish a chore chart for Will. I listed a few things he already does (clear the table, bring in the garbage pails) and added things he should be doing for himself but doesn’t always (get dressed, brush his teeth, make his bed) and tried to bribe him for my sanity (sleep in his own bed)! I listed these all in the chart and told him that he gets one check for each chore per day that he does…and that sleeping in his own bed gets three checks! Twenty checks in a week gets him 5 bucks – half to spend and half to save.

He was PUMPED. My boy was jumping up and down wanting to start right away. Then he asked when he’d get paid and if we could go and get a Lego set that day. We had to go to Toys R Us to get a birthday gift for someone and I told him we would go through the Lego section so he could understand that it would take him a long time to save up for something.

He ran to the section and pointed to one of the huge sets.

W – How much is this one Mommy?

Crickets. Tears the size of toonies welled up his eyes.

He proceeded to point at smaller and smaller boxes. His shoulders hunching further and further down with each answer. The smallest box was $12. It was all I could do to not buy him a box on the spot. Like the biggest one in the entire store. I just felt horrible for him. It was like I watched a piece of his innocence die on the spot.

But it was an important lesson.

He cried for an hour. And he thought about it all weekend. The next day he asked me how long he’d have to save to get the $12 box. I said about a month. Four weeks. I’m allowed to round up for him right? 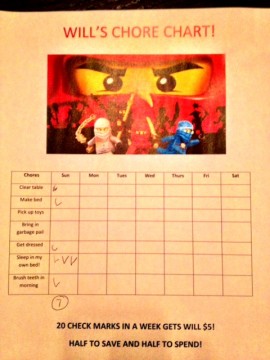 We started the chore chart today. Notice the three check marks under ‘sleep in your own bed.’ The kid figured out that the more he does that, the less he has to do the other things. I’m screwed.  But well rested!!!!