You are here: Home / Life / Life Events / The We Day Effect

The story behind We Day is quite simple actually. You’ve heard of the two brothers Craig and Marc Kielburger, right? When they were young, Craig who was almost 12 at the time had flipped open a newspaper and discovered a headline that read “Battled Child Labour, Boy, 12, Murdered!” It made a profound change in his life. He took the story to school and at his young age challenged other kids and adults to think about what child labour meant. He discovered that there were more than 215 million child labourers in the world, many working in slave-like conditions. Craig and Marc, along with their friends, wanted to do something about it.

However, they faced real challenges from adults telling them that they were too young to do anything so they decided to be the change themselves. At that point, Free The Children was born.

So, about We Day. In case you don’t know about the movement it’s all about the kids and the difference they can make in the world we live in. It’s not just an event filled with a star-studded line up of performers and guest speakers. That’s the bonus. But it’s about recognizing kids who are already doing something and inspiring them to continue in their passion for doing more. 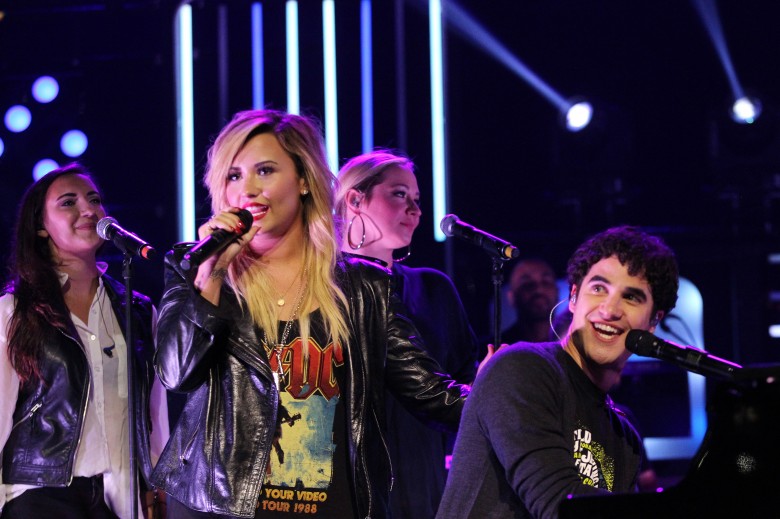 I’m going to tell you, from my experience of sitting in the Air Canada Centre with 20,000 youth screaming and cheering is absolutely mind-blowing. It’s not only because celebrities like Demi Lovato, The Jonas Brothers, Austin Mahone, Serena Ryder, Barenaked Ladies, Chris Tse or Imagine Dragon performed. It’s not only because Canadian astronaut Colonel Chris Hadfield told them that “the sky has no limits”. It’s also because of 10 year Hannah Alper stood up to face the crowd for the first time to speak. It’s because teenager Molly Burke who spoke about her bullying experience and the power of hope. It’s about Spencer West who each year has proven that he can redefine the possible — by the way, he climbed Mt. Kilimajaro… and he has no lower limbs.

“The sky has no limits.” ~ Col. Chris Hadfield

The impact on youth who attend We Day is direct and meaningful. In fact, research from a Mission Measurement 2010/2011 study shows that: 97% are empowered to make a meaningful difference. 81% feel passionate about a social justice issue. 61% believe they can be a leader of social change.

But We Day isn’t just a one-day event. I’ll be giving you more information about that in the coming weeks.

But of course it take a lot of money to put this show on the road. Since the kids and parents cannot purchase tickets to this event (they have to earn their way in through volunteer work) it requires an incredible amount of corporate donations to make it possible. Partners like co-title sponsors TELUS and RBC work throughout the year with Free The Children in various initiatives to make it all happen. 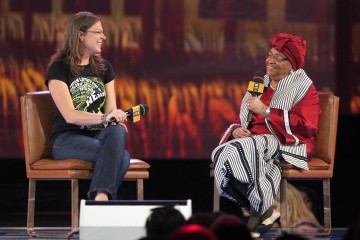 My 13 year old son has attended We Day the past three years. It’s more important to him to attend this event than any hockey game or concert. When I asked him what was the highlight for him this year, he responded not with what I had originally expected. I thought he’d say the music performers but instead the most impactful speakers were Liberian President Ellen Johnson Sirleaf, Mike “Pinball” Clemons, and Chris Hadfield. He was eager to see Spencer West again having met him the previous year.

What I’ve noticed in him immediately after attending We Day is his focus and determination. He’s put in his nomination form in hopes to become a Prefect at his school. His passion to want to to good was clear. He carefully thought out his words and actions as he detailed how he can use his creative skills to help make a change at school. “Because mom, remember one of the speakers said ‘use your skills to do good’?” And it has a ripple effect. His friends and teachers wanted to know about his experience at We Day. He’s a reserved kid but listening to him talk about this day is amazing.

“All my challenges and obstacles only made me more determined and motivated.” ~ Liberian President Ellen Johnson Sirleaf

“In 50 years, you will have changed the world. Let me be very clear about that. You will.” ~ Liberian President Ellen Johnson Sirleaf

“It takes courage to put someone else’s interests before your own.” ~ Michael “Pinball” Clemons, CFL Hall of Famer, Vice Chair of the Toronto Argonauts

“It’s not the critics who count, it’s the one who does the deed that counts.” ~ Michael “Pinball” Clemons, CFL Hall of Famer, Vice Chair of the Toronto Argonauts

“Everyone has something to give to the world, even a smile makes a difference.” ~ Serena Ryder, JUNO award-winning artist

“Use your creativity to create change.” ~ Darren Criss, cast member from the Emmy Award-winning series GLEE (host for We Day Toronto)

“Getting involved with something just to do something isn’t enough, you need to understand why you’re doing it.” ~ Spencer West, Me to We inspirational speaker, Free the Children ambassador, author and double amputee. 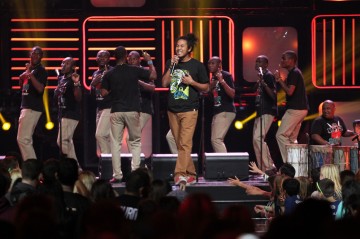 WE DAY TORONTO – National spoken word champion, Chris Tse, along with the Kenyan Boys Choir perform for 20,000 students at We Day in Toronto at the Air Canada Centre. Photo Credit: Chris Young/Canadian Press

We Day continues travelling to major cities across Canada including Vancouver (October 18), Calgary (October 24), Winnipeg (October 30), Saskatoon(November 6), Kitchener Waterloo (November 20), Montreal (November 25), and Halifax (November 27). It will also make a stop in Minnesota on October 8th. We Day will make it’s first trip across the pond to the UK on March 7, 2014.

Visit the official website for all the details at WeDay.com

Remember, it’s all about doing something, big or small, to make a difference. To be the change. So, tell us, do you, or your kids, volunteer? We’d love to know!