You are here: Home / Life / Family / How Focusing On The Positive Can Change Your Child’s Life

I was at an event recently for the book launch by the guys who are behind clothing company called Life Is Good. They’re known for their positive vibe T-shirt line with sayings like “Listen to Your Heart” and “Unplug Life is Good”. But I learned at the event that their optimism goes far beyond hoping that people buy their products. The energy is woven in the fabric of their whole being. Here’s what I mean…

When I had arrived at the event I was greeted with a blank ball and asked to write what I was grateful for… in one word. It wasn’t hard and of course, first thing that came to mind was family (I could have also written friends, naps, shoes, kids who sleep soundly) and the ball went into a collective glass bowl that filled as the evening went on. I kept an eye on it as it continued to grow.

Later on that evening after two inspiring spoken word poems perfectly executed by the incredible IN-Q, co-founder John Jacobs had a chance to talk about the company’s journey and introduced his book, Life is Good The Book: How to Live with Purpose & Enjoy the Ride he had co-written with brother Bert and published with National Geographic. He spoke about how in 1990, he and his brother wanted to start  business that combined art and somehow making money. They purchased a used minivan and from their hometown Boston, they set their eyes on selling t-shirts. They had set up on street corners and expanded to college campuses. After several years of trying to sell their merchandise they were faced with $78 left in their pockets and wondering what they should do and then the slogan “Life Is Good” hit them. Their company started to flourish. Today, you could say that optimism is the foundation of their success. 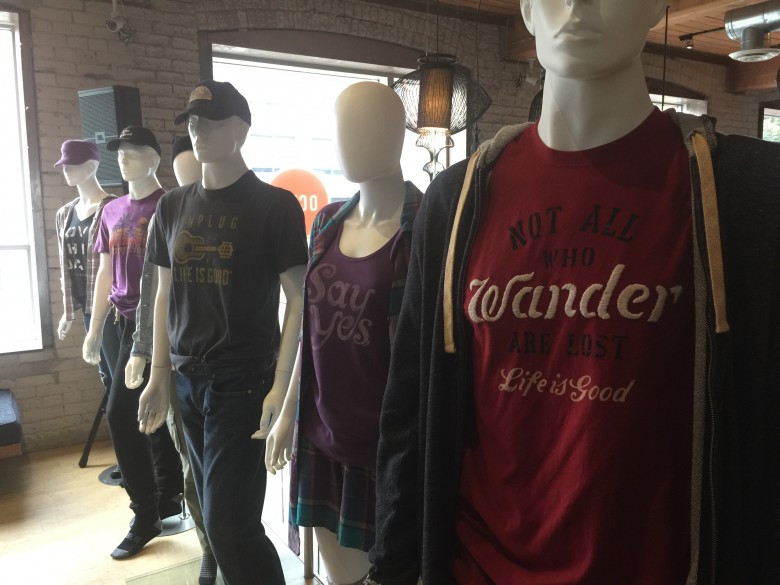 “Our mom, Joan Jacobs was the most powerful optimist in our lives,” said John. “Probably one of the most valuable gifts she gave us was every night at the dinner table Joan would look around at all her kids and asks all the kids to tell her something good that happened today. As simple as that sounds, it changed the energy in our world.”

John described growing up just as disfunctional and chaotic as any other family with six kids in a small home. “She encouraged us to focus on what worked well in our lives and we found ourselves gripping on anything that was obsurd, funny and positive. It changed the momentum in our house and carried us through our childhood. If there’s anyone we have to thank, it’s her for Life is Good.”

As John continued throughout the evening and spoke so highly of his mom I admit that I got emotional. All I could think about was how his mom must have done something right. John’s optimism was infectious and you just wanted to spend time with him. But it was also a reminder for me, as a mom, to be there for my kids. Listen to what they have to say and lead by example. My kids may laugh and shake their heads now when I attempt to follow dance moves (yep, go Google Whip/Nae Nae), but I know in the long run it may just be something that they will remember in their adult years and hopefully make them smile. While it may not be around the dinner table every night (I’m working on that too), I will start to get into the habit of asking my kids not just “how was your day?” but also “tell me something good that happened today.”

I want to be that mom and I hope I am. The one my kids will remember as someone who helped them look for the good even if something is may not seem that way. Realistic yet optimistic. 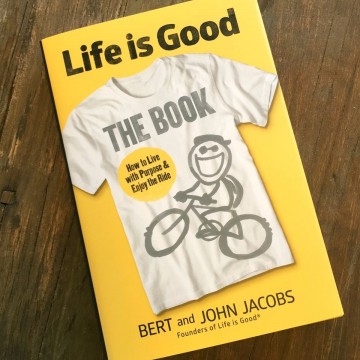 There were some great reminders for life in general. What he had spoken is something I’m already practicing in my own life and I’m looking forward to reading the book. John suggested that instead of pointing out the negatives around our lives, train ourselves to think in a positive light. It takes a bit of practice but eventually it just comes naturally…and people are drawn to it.  John shared several ideas that night…

Why? We need to remind ourselves that we are lucky to have these opportunities because there are many that don’t.

And the brothers recognize that. So, 10% of net profits made at Life Is Good goes to fund programs for children in need. They aren’t saying that life is perfect, nor is it easy, but it certainly can be good.

So, tell me something good today.