You are here: Home / Life / Family / The Greatest Gift You’ll Give This Season is Hope. 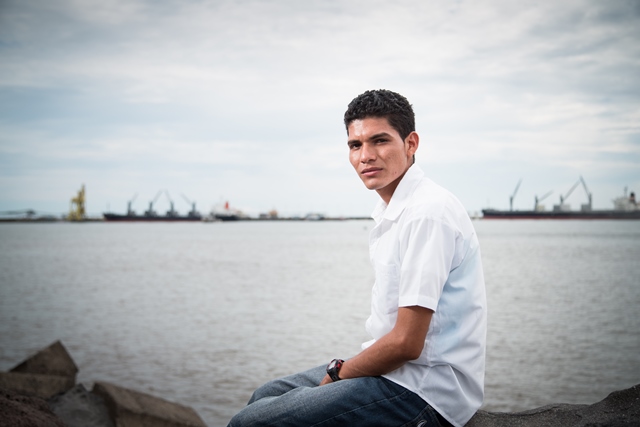 José Miguel, age 20, with the port where he used to work in the distance. Image: Paul Bettings, 2013

I think it was George Carlin who said that inside every cynic there’s a disappointed idealist. And don’t I know it. At times, my wholehearted belief in something has been the beginning of that same belief’s undoing; lean in too close to examine something and the entire weight of it might come tumbling down on you, you know? But here’s the thing: there are no hard rules. And hope still lives in all of us, no matter how tarnished our view of the world might be.

Hope still lives in all of us, no matter how tarnished our view of the world might be.

There are children in the world who have to work, who need to go to school but can’t, who don’t have time for play, whose families live in survival mode. But if the families of those children get the help they need to overcome the fundamental barriers that keep them from being able to invest in their kids’ education, the long-term rewards will be significant. And not just for families. For communities.

I went to El Salvador prepared to be a skeptic. Ideally, the poverty I would encounter would come to a neat and easy resolution, and I would leave renewed and optimistic and maybe even a better person. But I struggle with idealism, and occasionally even optimism. What if the worries that hang out there in the back of my mind weren’t my own inventions, but real true things that happen in real life?

José Miguel is almost 21 years old, and he has always dreamed of helping his family and people who are sick. He started working at five years old, harvesting and selling corn and beans. But he had the support to enable him to attend school. He worked seasonally, clearing land with a machete too large for his hands, and supporting his family as best he could while his father suffered complications from asthma. He finished high school at 17, and wanted to go on.

You light a fire under a kid when you make it possible for them to go to school.

To save for his education, José Miguel got a job at a nearby port, where he earned eighty cents per hour and often worked two to three straight days without sleep. In addition to savings for school, part of his income went toward medication for his father, so when José Miguel fell into a storage hole and injured his back when he landed against a metal staircase, he had no choice but to continue on.

This is a story of a kid pulling himself up by his bootstraps and working his way out of a bad situation, sure. But José Miguel’s story might not have been so inspiring without simple things like the chance to go to school.

At school, he was able to demonstrate his potential; through school, he was able to attend youth clubs in his community sponsored by a local area development office. At the youth clubs, he had opportunities to develop social and leadership skills. He became an advocate for youth in his community with World Vision, and was invited to travel to Brazil for a youth conference.

He’s studying nursing at university now, but he is still active in his local youth council. Youth councils serve as school reinforcement, but they also provide opportunities for further education, such as learning a trade, and advocacy work. I met some of the kids there, and was amazed at the potential they all had, and their drive to improve both their own lives and the conditions in their community.

When you give to an organization like World Vision, you are not just throwing money at a problem. You are providing the resources for families to pursue opportunities to better their own lives.

You light a fire under a kid when you make it possible for them to go to school. You give them the bootstraps to pull themselves up with.

In El Salvador I saw desperate, devastating poverty. And if viewed alone, like a headline, I might not have made it out of there optimistic. But I also saw hope. When you give to an organization like World Vision, you are not just throwing money at a problem. You are providing the resources for families to pursue opportunities to better their own lives. You are providing education, advocacy, access to healthcare, sanitation and clean water, nutrition programs and social support. You are providing hope, and the promise of future opportunities.

José Miguel is going to become a nurse and help his family and people who are sick, but he has already helped so many other kids just by paying his support forward and lending his voice to the causes of the people around him. And you can help by laying the foundations these kids will build upon. I really, really believe that you can.

So don’t just have hope this Christmas; give hope. Send a gift to a community in need, donate to relief efforts in places like the Philippines or Syria, or sponsor a child (and write that child a letter!). You can change the world, and you will.