You are here: Home / Life / Health & Fitness / Why You Need Kombucha In Your Life

You may have heard of kombucha—it’s a bit of a buzz word at the moment—before now. It’s an ancient Chinese health drink that has been around for more than 2000 years. I discovered it from a local producer a year ago at one of the city’s markets. Not only was it delicious but I learned that there are tons of amazing health benefits. Mainly, kombucha is known to aid in digestive health and help detoxify the body. With regular consumption the drink could also help with degenerative diseases as well as aiding in preventing and repairing cancers.

I was recently made aware of kombucha again as my friend had mentioned receiving her latest delivery from Chelsea Cotter, CC’s Kombucha Tea, who makes small batches of her “booch” as she calls it, for private clients. I asked her if she’s noticed any difference in her health—she’s been a regular kombucha drinker for over a year. She wanted an alternative to the overly sugared juices and pops (kombucha has a nice fizz to it and the ones I’ve tried tastes like sparkling cider) and it’s great for that afternoon pick me up as it offers mental clarity. 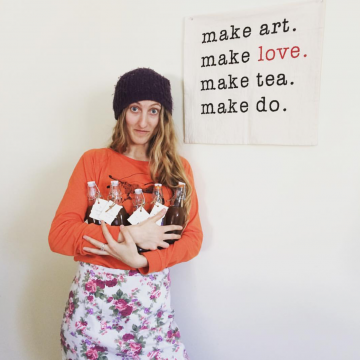 So, I reached out to Chelsea to find out how I can get my hands onto this magic potion and to learn more.

Kombucha is made with caffeinated teas. It can be black, green and/or organic. “The caffeine is crucial for the health of the SCOBY. Healthy SCOBY means healthy fermentation which means potent product.” said Chelsea.

So, kombucha is a fermented sweetened and refreshing tea. A SCOBY (acronym for Symbiotic Culture of Bacteria and Yeast also referred to as a mushroom or mother) that is the living home for bacteria and yeast that is grown. It also gives the tea a light fizz. The SCOBY can be grown or purchased dehydrated. I laughed when Chelsea told me she’s actually named her SCOBY “Scout”. Kombucha is fermenting tea made with sugar which is necessary for the SCOBY to grow properly to produce all the probiotic goodness.

You can even make your own at home.  The average fermentation period is about a week depending on the temperature of your home. Once you get the hang of it you can add in your own natural flavours to your liking—she’s added cinnamon, cloves and others for variety. Then it’s easy enough to store bottles of kombucha in the fridge in air tight bottles for a few weeks.

Friends of mine who have been drinking kombucha feel their energy levels are better in addition to healthier feeling over all. I love it myself as it helps me focus better and definitely feel the effects of aiding my digestive system. But when starting off, Chelsea suggests you start with half a bottle and let your body say hello. It was hard for me to stop at half a bottle at first as the drink is delicious and easy to guzzle but I paid attention to my body. “Most people feel movement in their tummies after few sips,” said Chelsea. “Which is totally rad and a compliment to the chef! Work your way up to a full bottle at a pace that feels right to you. It’s gentle enough to drink everyday but it’s also very powerful.”

She had also mentioned a recent article about the benefits of drinking kombucha if you’re planning to get pregnant. “Before getting pregnant it’s key to have a healthy gut microbiome so you can be at your highest functioning level and have beautiful flora to pass to your baby during birth.”

Personally, I’ve decided to have it after lunch to try and avoid that afternoon slugglish feeling and it’s working. I’m also paying more attention to what I’m eating prior to, because really, should you be inhaling a burger before a healthy drink? Probably not the best idea so…double win for being more cautious, right?

There’s tons of information on the internet about kombucha that’s worth exploring.

Could this be the best healthy drink? Have you tried it?