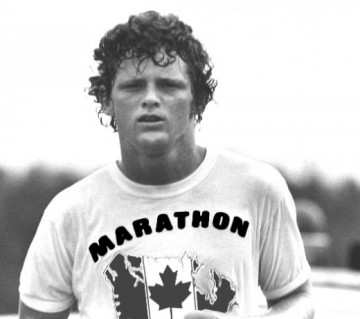 We started a new feature on Derringer in the Morning called “List-o-Mania”. It’s a top 10 list of anything and everything under the sun. With the Terry Fox run happening on Sunday I thought it would be appropriate to come up a top 10 list for Terry Fox.
I received a few emails from people that wanted a copy so I thought I’d post it here to share with you. The information comes from www.terryfox.org.

10-February, 1979 – Terry begins training for his Marathon of Hope, a cross-Canada run to raise money for cancer research and awareness. During his training he runs over 5,000 kilometers.

9-October, 1979 – Terry writes to the Canadian Cancer Society to support his run: he writes and I quote…”I’m not a dreamer, and I’m not saying this will initiate any kind of definitive answer or cure to cancer, but I believe in miracles. I have to.”

7-Terry ran a marathon a day (approx. 26 miles—42 km’s) and hoped to run 200 marathons in a row to make it across Canada. In the first few months he was largely unknown. During his run he experienced bleeding of his stump, shin splints, cysts and tendonitis.

6-August 27 -Terrace Bay, ON. Terry meets up with 10-year old Greg Scott of Welland, who had also lost his leg to bone cancer. “Greg rode his bike behind me for about six miles and it has to be the most inspirational moment I have had! At night we had a beautiful reception in Terrace Bay. I spoke about Greg and couldn’t hold back the emotion.”

Sadly on September 1, 1980 – After 143 days and 5,373 kilometers Terry stopped running outside of Thunder Bay, Ontario; because his primary cancer had spread to his lungs.

5-February, 1981 – Terry’s hope of raising $1 from every Canadian to fight cancer was realized. The national population reaches 24.1 million; the Terry Fox Marathon of Hope raised $24.17 million.

4-Terry Fox, ran 5, 373 km’s (3,339miles) across Canada in 143 days before passing away. Once again, incredibly he ran the equivalent of a full marathon every day and was the youngest person ever named a Companion of the Order of Canada.

3-There are 14 schools and 15 roads in Canada named after Terry. (Including an 83-kilometre (52 mile) section of the Trans-Canada Highway, between Thunder Bay and Nipigon, is renamed the Terry Fox Courage Highway in Terry’s honour.)

2-Every year, millions of people in close to 25 countries participate in The National School Run Day, The Terry Fox Run, and Terry Fox fundraising events. In 1999 national survey named him as Canada’s greatest hero, he finished second to Tommy Douglas in the 2004 program called The Greatest Canadian.

1-Today over $600 million has been raised worldwide for cancer research in Terry’s name.

Just a reminder the Terry Fox Run is happening this Sunday Sept 15th (national school run day is Thurs Sept 26th). As a father of two young children I think it’s wonderful that schools participate in this event so the next generation will know, understand and appreciate who Terry Fox is and what he stood for.

“Stop making that noise, it makes me want to throw squirrels.” The sound of crackling plastic was driving my husband to the point of rodent … END_OF_DOCUMENT_TOKEN_TO_BE_REPLACED

Summer used to be magical. The hot weather, the outdoor adventures, the complete and total lack of responsibility. School was over for the year and … END_OF_DOCUMENT_TOKEN_TO_BE_REPLACED