I had no idea that ovarian cancer is the most serious form of women’s cancer in Canada. An estimated 17,000 women live with ovarian cancer and 2,600 are diagnosed each year. But let’s not give up hope. We were invited to attend the LOVE HER Event recently in support of Ovarian Cancer Canada to celebrate the women who’s lives have been affected by this disease.

The event was emceed by the always fabulous comedian Jessica Holmes who zing’d into a high energy rendition of Beyonce’s “Put a Ring on It” to get the crowd all riled up, teased her hubby who was in the audience, got a little cozy with a few hunky firemen on stage and then proved that she’s got game channeling her inner Nicki Minaj. Oh yeah…she went there.

The night was full of fun but also fashion as this fundraising enthusiastic crowd made note of everything we wanted for the upcoming Spring/Summer season from Andrews and Linea Intima. There was live and silent auction action happening throughout the night and beauty giant Elizabeth Arden had every pursing lip “selfie” ready. 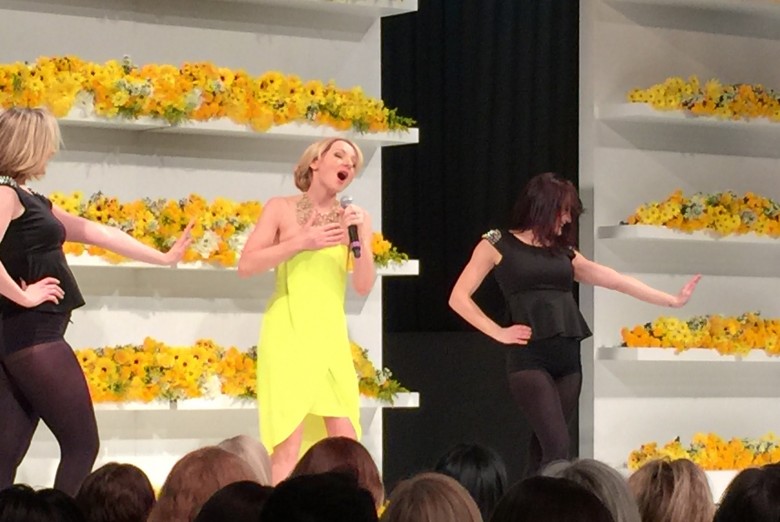 While it was fun bumping into beefy firemen all night there we definitely were made more aware of women who’s lives have been affected by ovarian cancer.  Bailey Urquhart, an ovarian cancer survivor took the stage to share her story. She was 24 when she was first diagnosed with stage 3 ovarian cancer. She went through extensive surgery that included a full hysterectomy and multiple chemotherapy sessions.

“It was devastating to have part of my womanhood taken away from me at such a young age. But we’ve already heard that story,” said Urquhart. She continued to shift the focus on what she had learned from the most challenging experience in her life. Urquhart explained that what she experienced also was the love from family and friends that helped her conquer everything.”When I was diagnosed with cancer, it took a lot of people’s love to help me overcome the devastation.” And that what this evening was all about – the love and support that is so greatly needed.

Dr. Vandehyden was awarded the Karen Campbell award at the event for her research commitment for over a decade. Notably, she helped establish a national ovarian cancer tissue bank network and other invaluable tools and resources to help scientists in Canada and around the world.

But it was shocking for me to learn that all women have some risk of ovarian cancer. All. So we need to educate ourselves, and our families, to look for the signs and understand our risk factors. You can link here to the Ovarian Cancer Canada site to find out your risks and signs: Ovarian Cancer.

The LOVE HER event takes place in cities nationwide with presenting partner CIBC. It’s a tradition that started four years ago. The next two events are planned for Calgary (March 5) and in Vancouver (April 22). For more information visit love-her.ca