Everyone is entitled to their own opinions. To be up front, I am pro-vaccination. I believe that if you have no previous medical conditions preventing you from having your vaccinations, you should have them.

That being said, I can’t make anyone do anything they don’t want to do and I do my best to respect other people’s opinions and life choices.

But this latest anti-vaxx meme is just too much. It’s fear mongering at its worst.

The image originally appeared on the Facebook group called “Feminists Against Vaccination” who describe themselves as a page that “exists to support women in their decision to abstain from vaccinations for both themselves and their children”. Note: As of 26/03/2015 at 10:30am the Facebook Group has either become private or has been removed.

That’s all well and good until we get to this:

“Feminists Against Vaccination” captioned this image with this lovely, truthful, completely 100% factual caption:

Studies have shown that vaccines serve as a gateway drug to heroin. The patriarchy has been known to employ the use of heroin to keep women under their power by keeping them addicted. #ResistVaccines #ResistHeroin.

And this Facebook Group is completely serious. This is not a joke to them. They truly believe these asinine statements and are perpetuating them by sharing them across social media.

What is a joke is the image itself… actually. According to EvidencePlease.net—a site that we assume looked into the mem based on its ludicrous statistic—explains how this image came to exist.

It seems that this poster was one that managed to filter into the general public without the safety blanket of context. 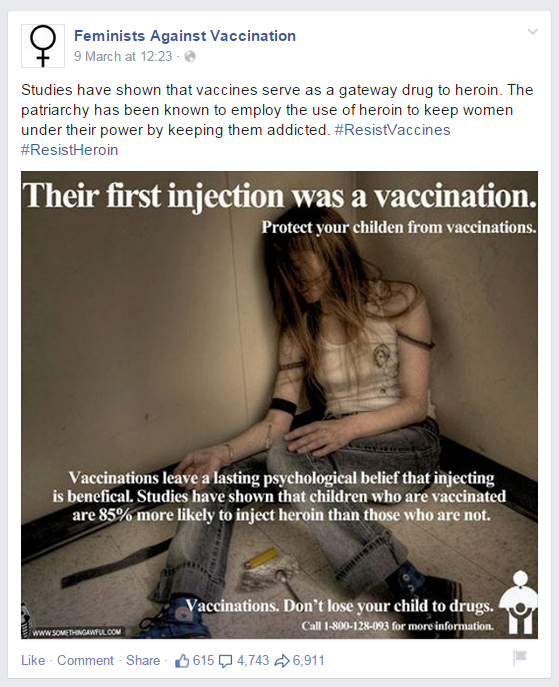