Man Flu (noun); An illness that causes the male to be helpless and sicker than any other family member.
In females: a cold

There is a family story that is often told about a time when my dad was sick. My mom, pregnant with me, was headed out the door to take my older sister to daycare before heading to work. My dad, so “weak” from a common virus, was too ill to call in sick himself and asked my mom to do it. She called his boss, then waddled to the door, only to be beckoned back by my dad asking for a glass of orange juice. Soon she was off to work, eight months pregnant and managing a classroom of 25-second graders. My dad didn’t move for the rest of the day.

What is it about the male species that causes them to become incapacitated when they are ill? Now that I am married, I see my husband and I moving into the familiar space of “man sick and incapable” and “female sick and upright”. I don’t enable the behavior and actively campaign for some rallying. I repeat the term “sack up” quite often during cold and flu season.

I have tried reverse psychology when my husband, with gallows-dread in his voice, announces, “I think I am coming down with something.” I encourage him to keep a positive attitude, drink lots of fluids, and show that cold who’s boss.

Spoiler alert: the cold is always the boss.

A tactic that entertains me, but seems to only cause weakened spirits in my household, is the timeless art of mockery. Offering my beleaguered spouse an obituary template so that he can make sure his story is told, does not go over well.

Attempts to ward off illnesses have included soup, tea, vitamins, and effervescing immunity boosting drinks. Nothing ever works, and I can only stand by and watch my husband descend into the abyss of . . . sniffles.

ME: My husband has a cold do you have those euthanasia pills?
PHARMACIST: I think you mean echinacea pills haha
ME: No.

God forbid, the evil germs that have ravaged your spouse, start to go after the children. As the mom of two boys, my greatest fear is having all three males sick at once. My couch is only so big, and can only accommodate so many near-lifeless beings splayed across it. You start rationing tissue like it’s about to be made contraband, and are tempted to see if tampons can effectively be shoved up noses to stop the unending flow of snot.

Just when you have reached the point where you’re not certain you will survive the plague that has descended on your household, the inevitable happens. You are now sick yourself. It’s hard to understand at what point the germs transferred to you. Was it when you were washing everyone’s bedding for the fifteenth time? How about when you were picking up the mountain of snotty tissues that were thrown on the floor because a couch occupant was too weak to aim one centimeter to the right to reach the bag you thoughtfully provided. Or perhaps, it was when the baby vomited straight into your mouth. Who is to say? I’m not a doctor.

The pampering and caretaking you have just provided to everyone in the household should come back to you tenfold.

You are now on the sick train with everyone else, but you’re also the conductor and have to prevent everything from crashing into a brick wall. How do you manage to keep it all together, when you just want to crawl into your bed and sleep for three days? One baby step at a time my friend. 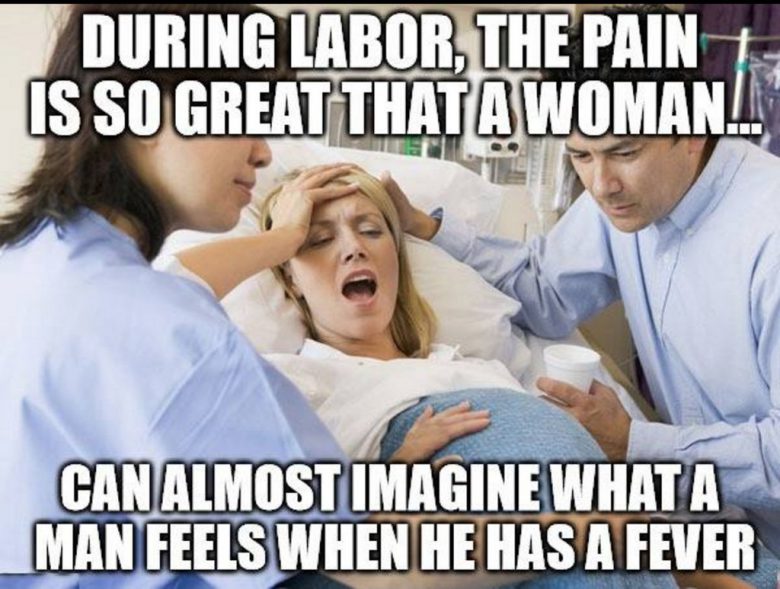 It sounds cliché, but you have to be able to take care of yourself before you are any good to others. Drink lots of fluid, rest when you can, and bypass tempting junk and fill your tank with healthy whole foods instead.

You can and should set limits on how much you have to be responsible for doing solo. Unless your spouse also has two broken legs and two broken arms, they need to pitch in and contribute equally to the care of little people.

As someone who is generally opposed to screen time for very small kids I give myself and everyone permission to have Netflix streaming 24/7 while you are ill. So what if they learn their ABC’s a nanosecond later as a result? The goal here is your survival.

I used to play a game called “What’s on My Butt” with my oldest child when I was sick. I would lay on my stomach on the couch and close my eyes. He would run and get things from his room and place it on my butt. My job was to guess what new toy had been placed on my rear. I would get quick snippets of rest while he was fetching yet another item. Survival people, survival.

I do not live in an area where restaurants, other than pizza chains, will deliver food. This is when homemade freezer meals come in handy. If you’re short on freezer meals, a large bowl of cereal on the floor will also suffice. Or serve everyone popcorn and pat yourself on the back, because after all, it is a whole grain.

With cold and flu season approaching us quickly, prepare yourself for the inevitable. At some point in the upcoming months, your spouse will let out a sneeze and immediately take to bed. Do your best to not sprain your eyes when you roll them too aggressively, having being asked for an extra blanket.

All while you puke into a bowl.