For the past few months, I’ve been telling you all about my experience with the thermal water and products of La Roche-Posay. But now I think it’s time you heard from someone else. I’d like to introduce you to Colette. In July, she travelled with her husband, her daughter, and her son, Liam, to La Roche Posay, France to receive water therapy at the thermal treatment centre. The following is an excerpt of a conversation I had with Collette when I visited her at the centre:

As soon as he was born he was always scratching. He would scratch his little face to death if I didn’t put those little mitts on him. I didn’t know what to do at that point so I bought some organic cream and put it on his face. There were no flare-ups at that point, just really dry, dry, itchy, itchy skin. So I think that may have been the start.

When he was about four months old, I remember taking him to one of those baby massage classes. I remember opening up his blankie and he was just covered in a flare. His whole stomach was bright red and nasty. The girl next to me said, “I think he’s got eczema.” That’s when we first went to the doctor.

He was only four months when he has his first steroid cream. And then we just kind of managed it. We didn’t know what else to do. We didn’t get any other explanation for keeping the flares at bay.

Then I met the executive director of the Eczema Society of Canada. She had reached out to the charity because she had two kids with eczema and wanted to get help, and then give back.

She was the one who told us about the bathing regimen. She said you have to bathe him three times a day and cream him as often as you can. That’s when the flare-ups started to subside a little bit; it was a little more comfortable for him. That was when he was around 1 1/2 – 2. We’ve been doing them ever since he has flares. 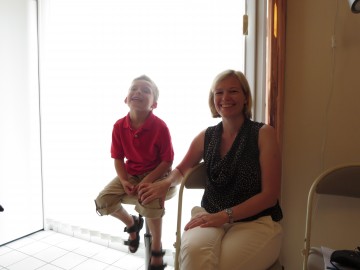 Liam has the trifecta: eczema, alleriges, and asthma. Because of this trifecta, he had other health issues that took precident, like his breathing. So we’d find ourselves dealing with that more than the eczema. We finally got a dermatologist at the Hospital for Sick Children. She told us that even when he doesn’t have visible flares, he still does have big patches of eczema on him. She pointed out that those spots that I just thought were dry skin were actually exczema and that’s why they’re always itchy. He has a lot of peeling toes; for the longest time we didn’t know what that was. The dermatologist said that’s part of the eczema as well.

We got connected with La Roche Posay’s Hundred Families Program and this opportunity in France to come have the treatment. So we sent off our information and we were accepted. We were very lucky… we kind of just stumbled into it.

In terms of the La Roche-Posay products, I had seen them and I had used them but  we really started to use them when the offer came about. They work. Really, really well. I really endose them. They sent us the Lipikar oil and Lipikar syndet-it’s kind of like a soapless soap. Its sooo hydrating. And the oil’s lovely. And of course the Lipikar balm. That made a big difference.

A few months later, they travelled to La Roche Posay to begin treatment…

Those patches I was talking about? They are normally very, very rough. Now they’re soft. They almost feel like the rest of their skin. Also, this typically at this time of year (summer) Liam will get eczema in the backs of his knees. I haven’t seen any of that. It’s been great. And of course the feet have cleared since we’ve arrived. He’ll still complain about the odd itch but it’s been reduced since the treatments.

And I haven’t used any steroids. I think the Lipikar is taking care of it.