You are here: Home / Life / Family / Inspiring Moms and Their Role Model Daughters

Last week I had the honour of meeting the Canadian Women’s Hockey Team in person. I was invited by P&G’s Bounty to be a part of a sponsored dinner for these talented athletes where their mothers had flown in to surprise their daughters the night before the big game against the U.S. Celebrating mothers is a P&G tradition and to be a part of it was truly inspiring. 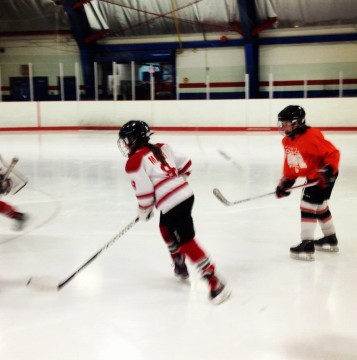 Every player I spoke to was inspired and grateful to be a part of Team Canada.

As a mother of a hockey playing girl myself I was eager to get the opportunity to speak with the players and their mothers to get a sense of what this journey had been like for their families. Despite all of the hard work and sacrifice over many years (although none of the women I spoke to saw it as such) every player I spoke to was inspired and grateful to be a part of Team Canada.

As a parent of children who play competitive sports I often hear people question the time commitment and the pressure put on children at such a young age. What they don’t see is the drive and desire to play. Every day my daughter comes home from school asking if she has hockey today and hoping that the answer is “yes”. In her spare time she plays shinny or road hockey or mini sticks whenever she gets the chance. Never once has she complained about practice and her passion is what drives her. In speaking to the players and their mothers I heard much the same thing. One mom said to me, “We never had to push her. She did it herself!”

“I want to be just like my mom when I have kids.” ~Meghan Agosta-Marciano, Team Canada

Later that evening I had the privilege of interviewing P&G sponsored athlete, Meghan Agosta-Marciano and her mother and learned that Meghan’s love and passion for hockey started at the age of 6 when she registered to play. At that time she already had the dream to play hockey for Team Canada in the Olympic games. She pushed herself to be the best and was rewarded with the opportunity to play on Team Canada with many of her childhood heroes. All the while cheering her on and supporting her was her family. Meghan says that her dad had a huge impact on her but that mom’s support and contribution often goes unnoticed. Meghan then added, “I want to be just like my mom when I have kids.” 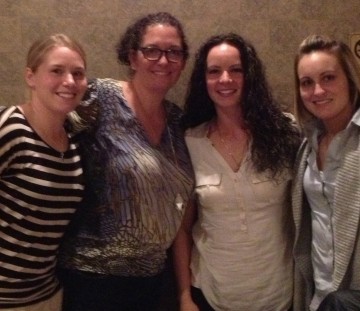 I was so inspired by these women. They are exactly who I think our daughters should be looking up to. During dinner I sat with goalie Shannon Szabados and forwards Jayna Hefford, Haley Irwin and Marie-Philip Poulin. They were gracious and took the time to answer questions and even signed autographs for my daughter.

These young women deserve to be admired. Their mothers deserve to be celebrated for the role they play in their lives. I am simply grateful to have been able to be a small part of it. Check out the video below of the surprise. Love it!