You are here: Home / Life / Health & Fitness / Get Your Cheer On With BMO Soccer This Summer

The World Cup may have just come to a close, but soccer season is still in full swing. The soccer fields are always packed in the evenings and weekends, as well as during the day with all the daytime soccer camps across the country. There is no better way to spend the morning than in a park watching the future Messis and Beckhams run the ball up and down the field.

I watch my nephew almost every Saturday of the summer. He is only four, but he is an intense little guy and when that ball comes to him he makes every effort to get a goal. Granted, sometimes he scores on his own net, but I still cheer for him louder than anyone else in crowd.

BMO is very active in the Canadian soccer community and their new program is set to get Canadian soccer players amped up. They want to see just how excited Canadians can get about soccer and the soccer stars in their lives. With their sponsorships of the Canadian Women’s and Men’s National teams, as well as almost 20,000 house league soccer players across Canada, it’s only natural for them to launch BMO Ready, Set, Goal! this summer.

From coast to coast, BMO is looking for the most spirited cheers in Canada. The BMO Ready, Set, Goal! program is a new national initiative that encourages youth soccer teams to submit their most enthusiastic team cheer for a chance to win a trip to see a Major League Soccer (MLS) game. (Did you know that BMO also sponsors MLS Teams in Toronto, Montreal and Vancouver?!) 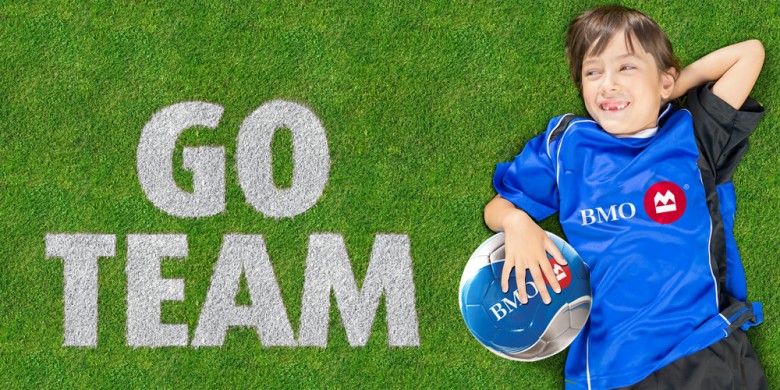 Until September 26, 2014, Canadians can submit their team’s cheer video to BMOSoccer.com. Shoot it on your smart phone, video camera or anything in between. Get creative and really show Canada why your team should be chosen as the most spirited soccer team in the nation.

If your child is a soccer player between ages 7-12, playing on any team, at any level, their team is eligible for entry.

Every entry will receive 15 BMO water bottles for the team and a special offer to open up a brand new BMO kids account (and we all know how important it is to be money start as early as possible). Over the course of the contest, up to 100 teams each week will be randomly selected to receive a $75 gift card to help cover your team’s expenses; just think, new soccer balls or jerseys!

At the end of the summer, in September, one team will win the Grand Prize and all the players and coaches will get to attend an MLS game… the perfect end to a great season!

Make sure you check out the Rules and Regulations before entering and remember to have fun with it. Spirit Fingers are never a bad idea!