You are here: Home / Life / Holidays / Halloween (the pre-show) 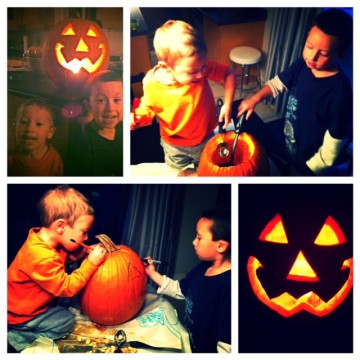 Our sense of smell has to be our strongest sense, no doubt. Last night we carved our pumpkin and I gotta tell ya, as soon as I opened up the top of that bad boy, the smell of the inside of the pumpkin took me back to being a kid.

What a wonderful tradition carving a pumpkin is. I don’t know who was the first to look at their harvest and think, “I got an idea, let’s carve a face in that big orange cucurbita pepo” but that was a genius move. I want to thank you, because of you we get to build memories and eat pumpkin pie all in the same night.

Seeing my own two boys scoop the seeds and guck out of that thing certainly took me back. Classic stuff in my house; dad lays out the paper and carves, kids do the scooping, and mum toasted the seeds. Not too much has changed over the years.  Although, take it from me, the one thing I did learn this year was that paper cuts and pumpkins guts don’t mix…it’s still stinging as I write this blog.

As I said, carving that pumpkin took me back to my Halloweens past. I’m talking late 70’s, early 80’s specifically. Do you not agree that our costumes were so much scarier than the ones of today? Don’t get me wrong, there is nothing cuter than lil’ super heroes and princesses but I remember being freaked out as a kid. Why is seeing a kid as Dracula or even a ghost with a sheet so much freakier than the stuff of today. Even the costumes that were popular at the time seemed scarier than the ones today. I think the masks back then had massive eye holes and were less detailed, which made them scarier.

Here is a little comparison from Halloween costumes I remember as a kid vs. today. You tell me which is spookier.

Alf vs. Iron Man
Yoda vs. a Ninja
Jem and the Holograms vs. Ariel
Smurf vs Power Ranger
ET vs. Anything

Lastly, I asked the boys what they wanted to name our jack-o’-lantern, they went with Jack in the Box!