I was on Facebook the other day and noticed a few status updates from my friends. There were  few mentions of only consuming mass quantities of coffee for the day as they had lost track of time or couldn’t be bothered to fix themselves something to eat. We all laugh and give each other virtual high fives in a solidarity type of reaction. Okay, I’m also guilty of that some days too. But then it made me stop and think.

Why do we do this? Well, for me, it’s a matter of time and meal choices available, especially when I’m running around doing errands and dealing with the kids. I know I need to do better, not just for my family, but for me. Take it one step further; I know I should include more veggies into my daily diet. I also want something that tastes good, too. Is that too much to ask for? 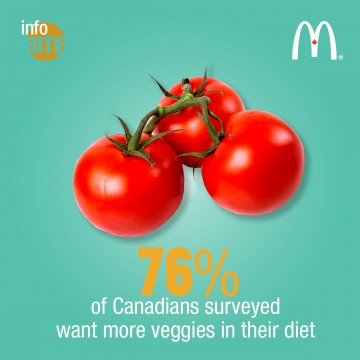 Apparently I’m not alone. A recent study* by McDonald’s and Environics Research Group found that, of the Canadians surveyed, 76 per cent feel they should include more veggies in their diet and 71 per cent search for veggie-only choices at least sometimes, even if they don’t consider themselves to be vegetarian. What’s also interesting is that 51 per cent of the respondents feel that finding veggie meal options when dining out is even harder at quick-service restaurants, calling them “fairly limited” to “terrible”. Do we sometimes decide to not even step foot in there for lack of veggie choices, or if you’re like me and do venture into one with the kids you just pick at their fries instead of ordering for yourself?

Someone pointed out to me that there’s a growing trend in Canadians wanting to eat more vegetables. I guess the good news here is that we’re more aware. We know we should have more veggies when we’re at home or out running around. 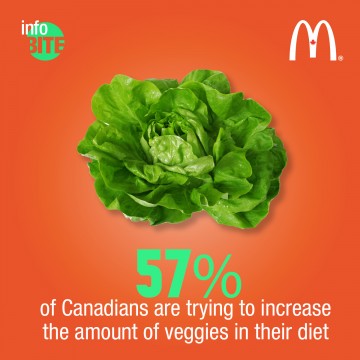 Now, I admit I’m not a die-hard one way or the other type of eater. I believe in enjoying what you eat and having a balanced lifestyle. Honestly, working in veggies anywhere is a bonus. I figure anyway I can include veggies is better than having none. Cut up vine tomatoes in spaghetti sauces, fresh-cut veggies next to my charcuterie board of Italian salamis and cheeses; if it’s there, it will be eaten. That dipping sauce is there. I know it’s full of calories but everything in moderation. That’s my mentality. Know what I’m sayin’?

After dropping off the little one at a play-date, I had fifteen minutes before a meeting yesterday (typical for me) and had heard that McDonald’s had just introduced the new veggie Signature McWrap™. I was en route, and didn’t have time for lunch, so I dropped in to grab one. The two new entries on their menu included the Sante Fe Veggie and Mediterranean Veggie   Signature McWrap™. The company developed the new products based on demand fromCanadians for more veggie-based menu choices. Grabbing one was very convenient for me as you can eat them right out of their packages. But the best part is that each wrap is customizable. So, if you don’t want red onions in that Sante Fe Veggie, just let them know.

Both of the new veggie Signature McWrap™ options were developed by foodie and farmer Anne Parks, Director of Menu Management for McDonald’s Canada, who specially customized each recipe for the Canadian palate. As an added bonus, she was kind enough to share some of her personal favourite recipes with us, including one for a Summer Garden Hash that is making my mouth water (see recipe below). These recipes just reminded me that it’s easy enough to put together a salad and add your protein if desired (think boiled eggs, a single serving can of tuna, or chopped up leftover roast beef).  Easy enough but not often top of mind.

I’m curious to know, do you ever have trouble adding veggies to your meals at home? When you’re out and need to grab something to eat, have you found the lack of veggie choices frustrating and what are some of the deciding factors for what you ultimately decide to eat?

Here’s are a few great recipes from Anne! 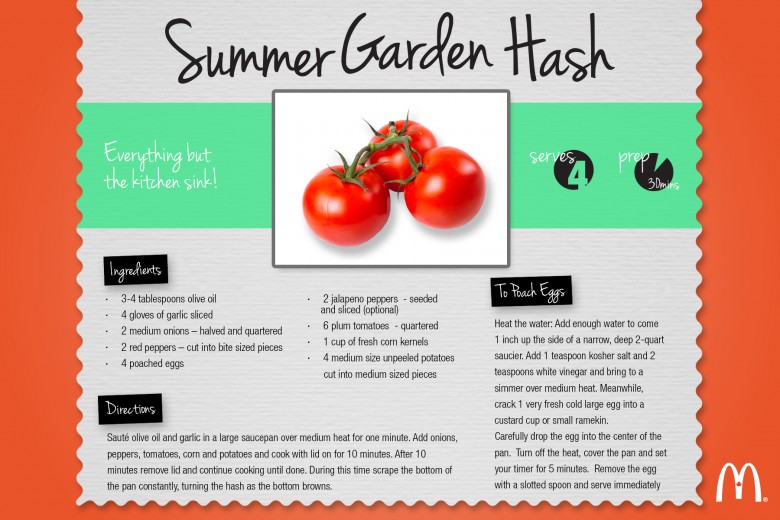 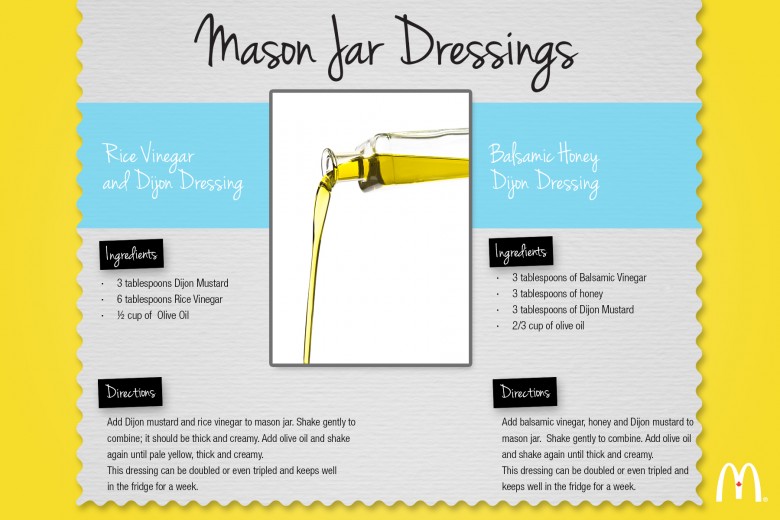 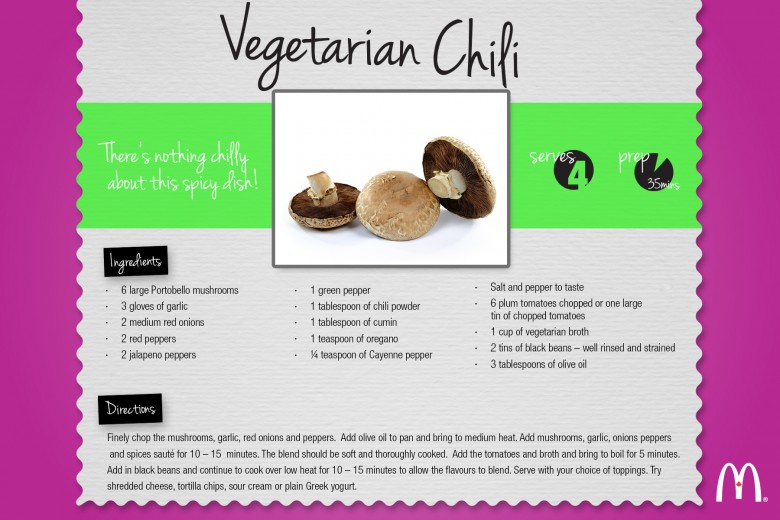 *About The Survey: Environics Research Group conducted an online survey from August 12 to 15, 2013 of 501 Canadians who have eaten at quick service restaurants over the past four weeks. All respondents were aged 18 to 64 years old and were recruited from an online consumer research panel. Quotas were applied to represent the age, gender, and different regions in Canada.

This post is sponsored by McDonald’s Canada. All opinions expressed are my own.