You are here: Home / Life / Food / The Cheesecake Factory Is Here (And We Want Everything On The Menu!)

It’s finally here! The Cheesecake Factory has landed at Yorkdale Shopping Centre in Toronto (of course it did) and we were invited to get sneak peek just days before it opens to the public. But what’s all the hype about? We learned very quickly that this US chain has a loyal following. Everyone remembers their first time and if you ask, they’ll tell you about the huge portions.

Our family’s first visit to a Cheesecake Factory happened in Chicago many years ago. With a sleepyhead tot in tow and a curious four-year-old, we decided to try. The line up was long at the restaurant so we opted for takeout and ordered up a few slices of their famous cheesecakes to take back to the hotel room. I’ll never forget the staff looking at me and asking how many of us were there. When I told her two adults and one child, and never mind the sleeping one, she told us one was probably enough. She was right. We couldn’t even finish it. 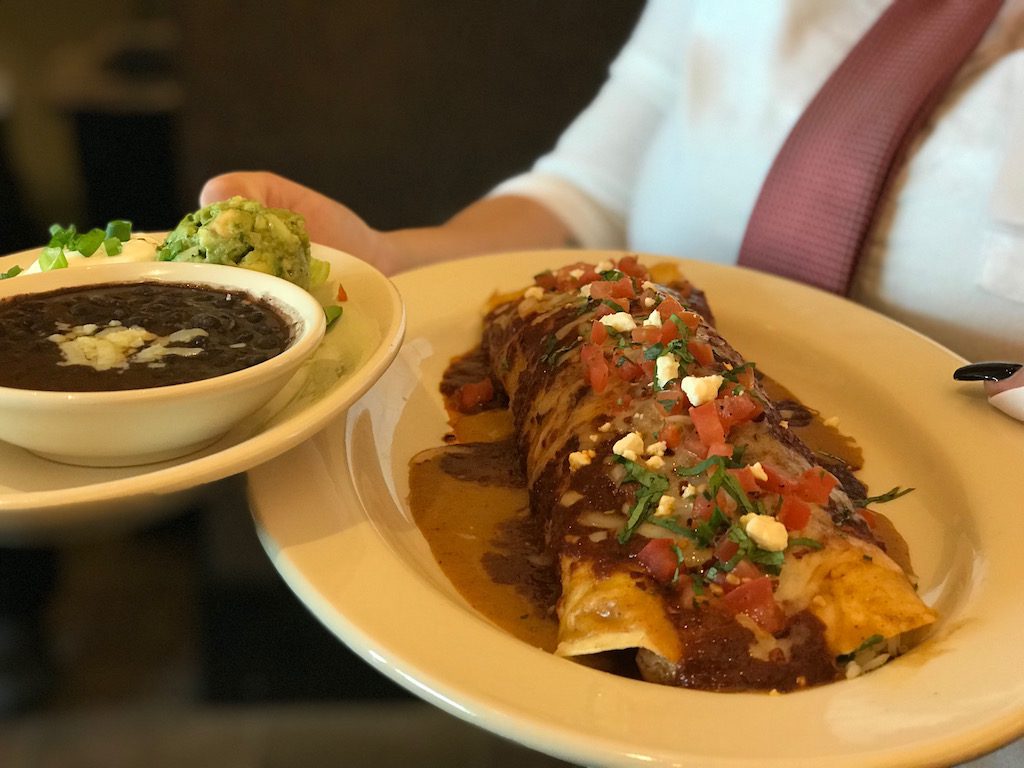 So, here we are at the highly anticipated opening of the very first Cheesecake Factory in Canada. It’s the first company-owned and operated restaurant outside of the USA. Does reality live up to the hype? My 13-year-old son (the sleepyhead baby on our  Chicago visit) and I went on our first “real” Cheesecake Factory dining experience on a mission to find out.

The menu features over 250 of their signature dishes that mirror what you would expect in the US restaurants. The only difference is the wine and beer selection. Here there’s obviously more focus on Canadian labels. But the rest of the menu? HUGE! They know their customers would expect nothing less. When you glance through the menu, your eyes will grow big at the dizzying amount of choices. And yes, the portions are huge too. The management tells us that they actually encourage people to share which was nice of them to warn us! We didn’t listen so now we have leftovers for days (yay, for me not having to cook, right?) But noted for next time, plus there are lunch portions available during the days until 5 pm. 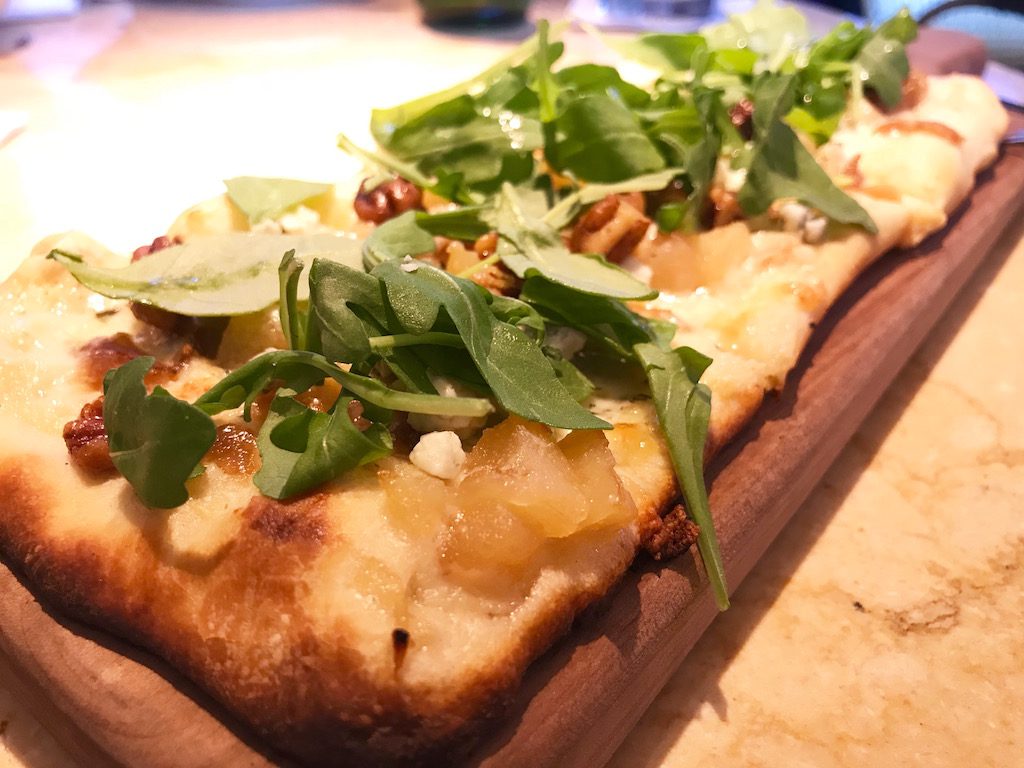 We had heard several friends talk about the Avocado Egg Roll appetizer, but it was the Tex-Mex Egg Rolls that beckoned to us. They were seriously delicious! We were told, like everything else on the menu, items are all made in-house. The egg rolls are made fresh daily—from the roasting the chicken right down to corn as well as the accompanying aioli dipping sauce. Then hand rolled. Why is that impressive? Well, most large restaurants chains will have a third party do all the prep, freeze and ship them ready to cook. Here it’s all done in-house. They pride themselves on details like this that most people probably aren’t even aware of. 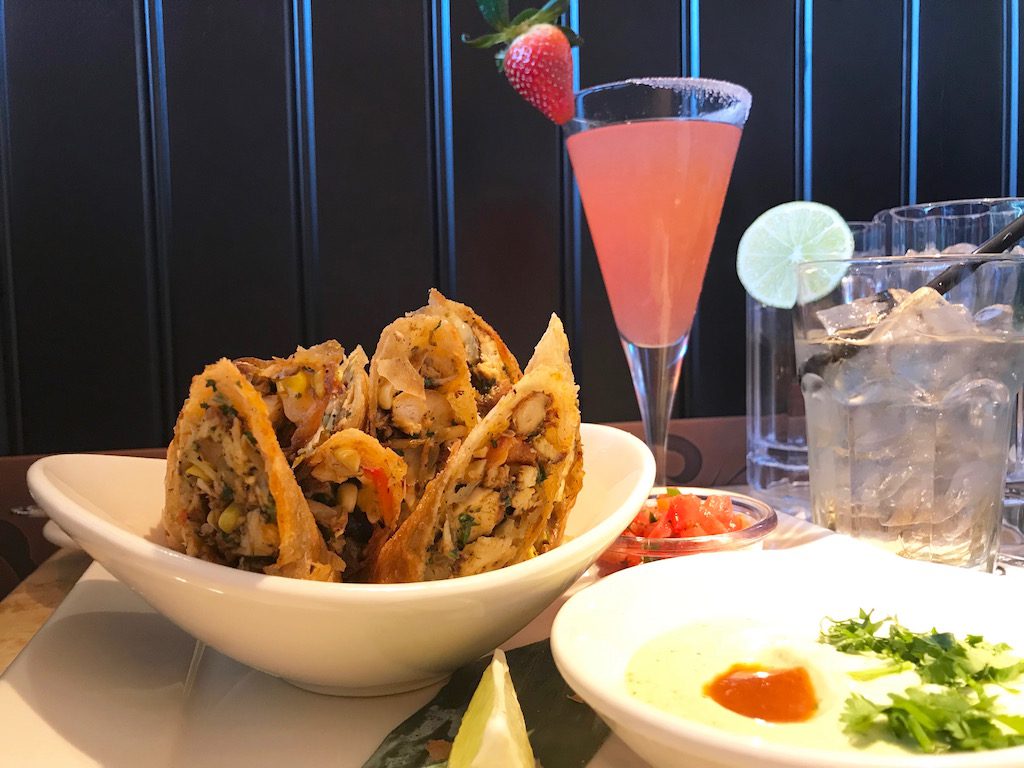 So, what else should you try? The menu is filled with “something for everyone” from burgers and cheese steak sandwiches and the ever popular Spaghetti and Meatballs. Customer favorites include the Orange Chicken served with rice and vegetables, and the Chicken Madeira—the most popular chicken dish. The Cheesecake Factory “Comfort Classic” Chicken & Biscuits is  available as is the Shepherd’s Pie. But for those that are looking for more sophisticated dishes, the Pear and Blue Cheese Flatbread appetizer is a standout. Seared Ahi Tuna looked wonderful coming out of the kitchen and the Miso Salmon, with a choice of white or brown rice, was so fresh and tasty. The Cajun Jambalaya Pasta also caught our attention with generous shrimp and moist chicken pieces with a hint of spice. 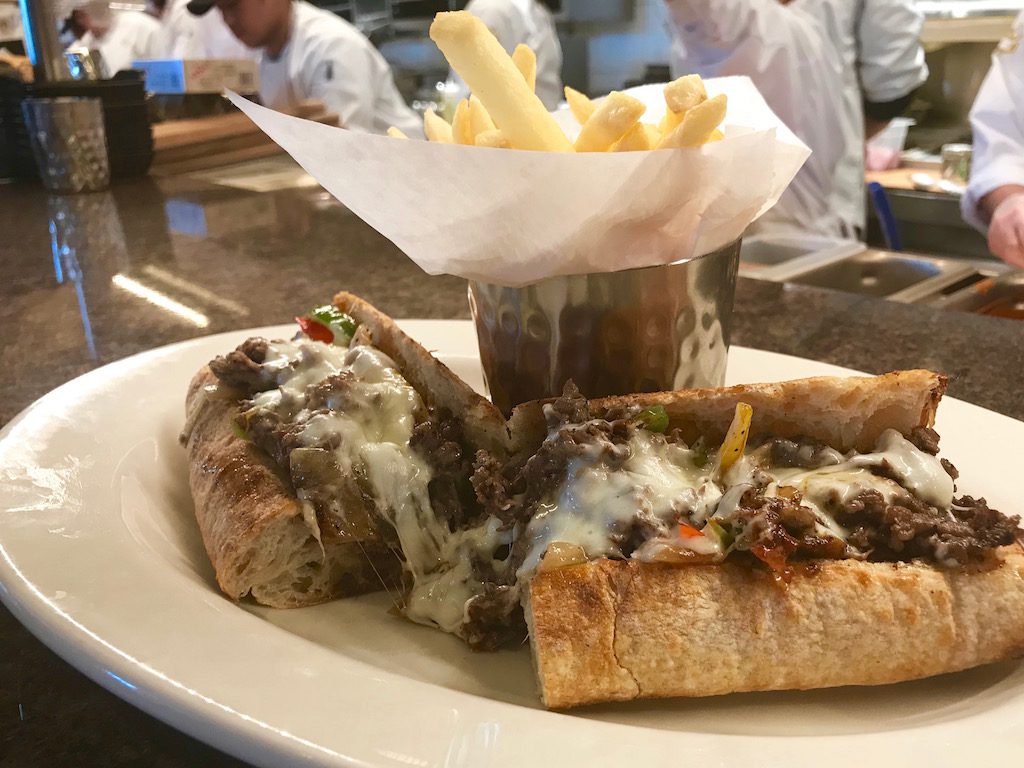 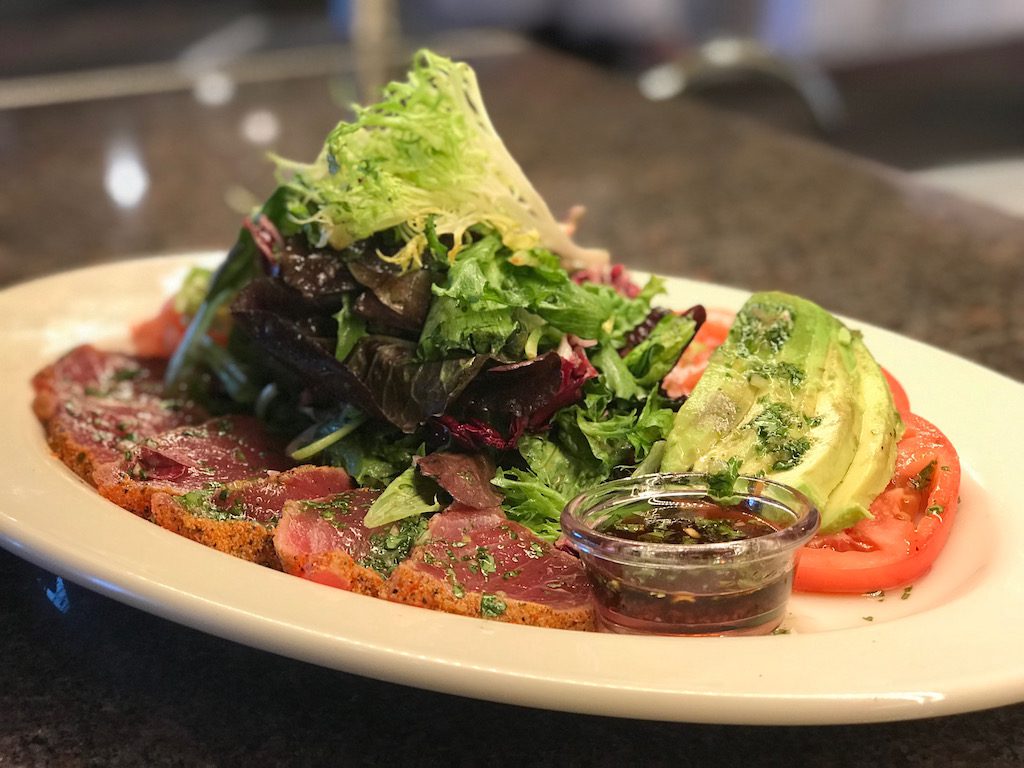 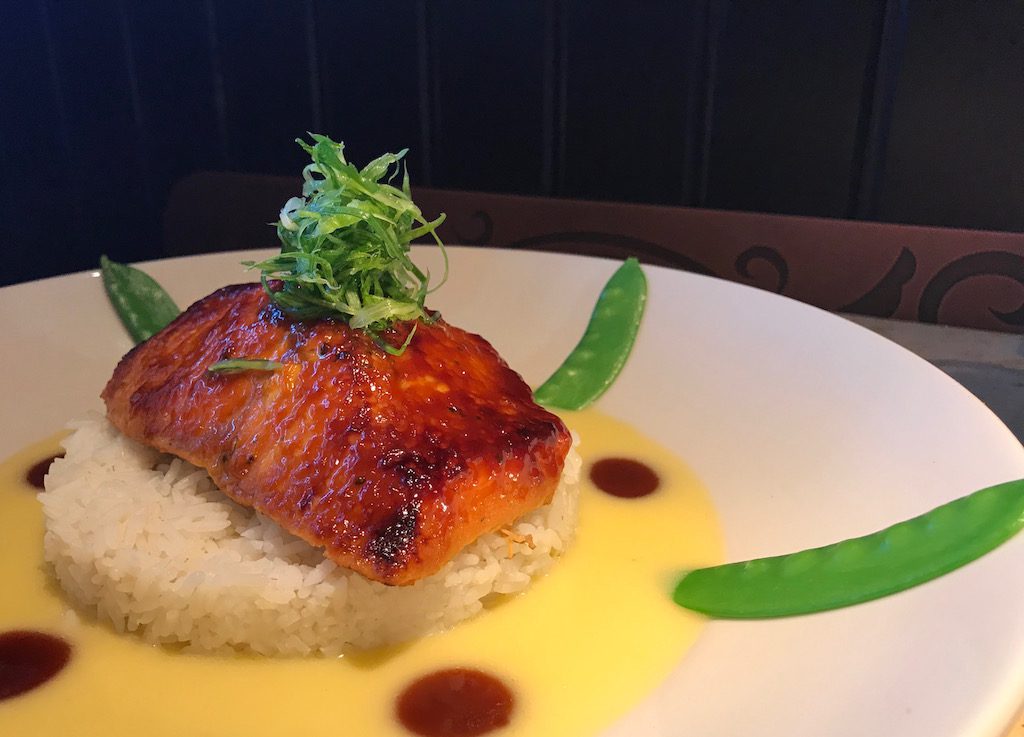 If you haven’t been, the Chicken Parmesan “Pizza Style” is worth trying. Described as chopped chicken breast coated with breadcrumbs, covered with Marinara Sauce and lots of melted cheese topped with angel hair pasta in an Alfredo Cream Sauce—sounds over the top but it’s a real winner. But again, it’s seriously enough to feed at least two or three people! 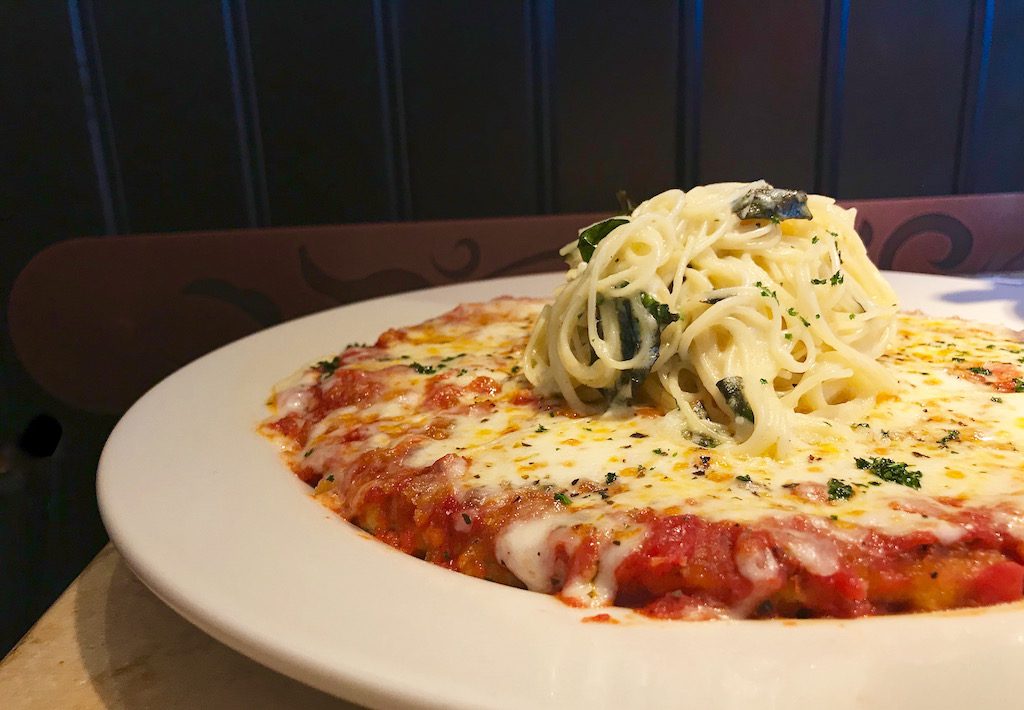 Of course, you need to save room for the dessert. We were told there are about 50 different cheesecakes on their roster. The Celebration Cheesecake is a layered cake of cheesecake, white cake, and icing. We also had to order the Toasted S’mores Cheesecake, because… s’mores! The popular Red Velvet Cheesecake is there and the 30th Anniversary Chocolate Cake Cheesecake is a showstopper with its layers of their original recipe cheesecake, fudge cake, and chocolate truffle cream. Wowza! 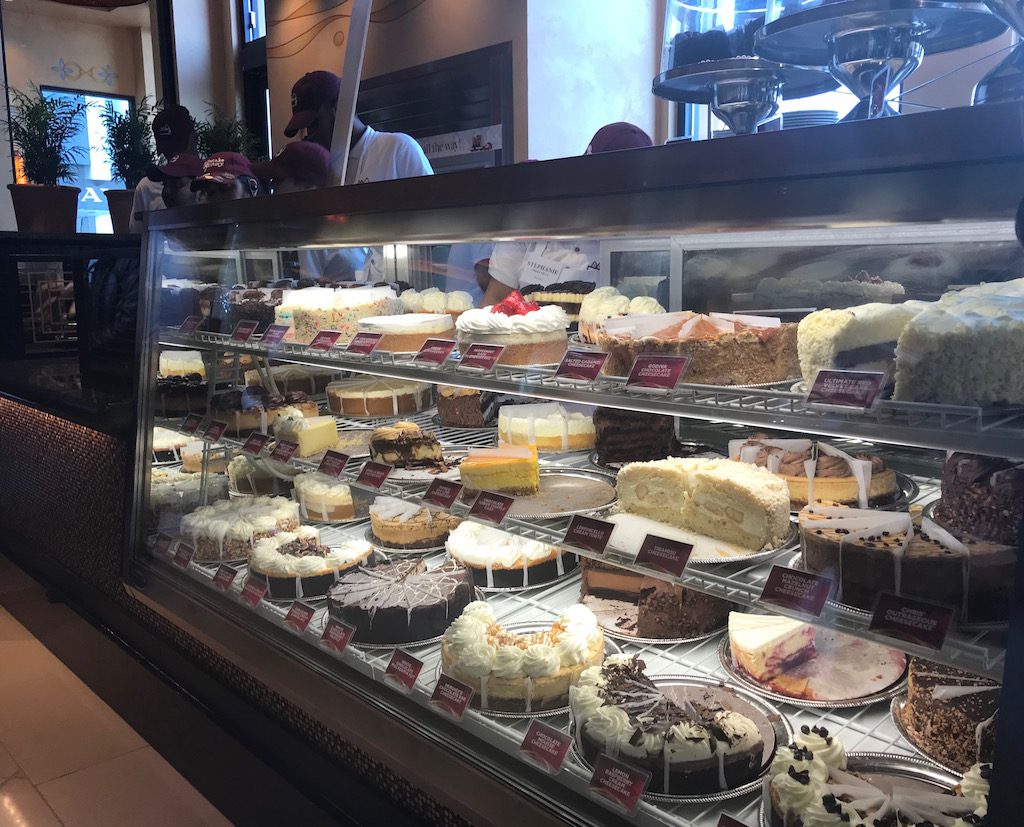 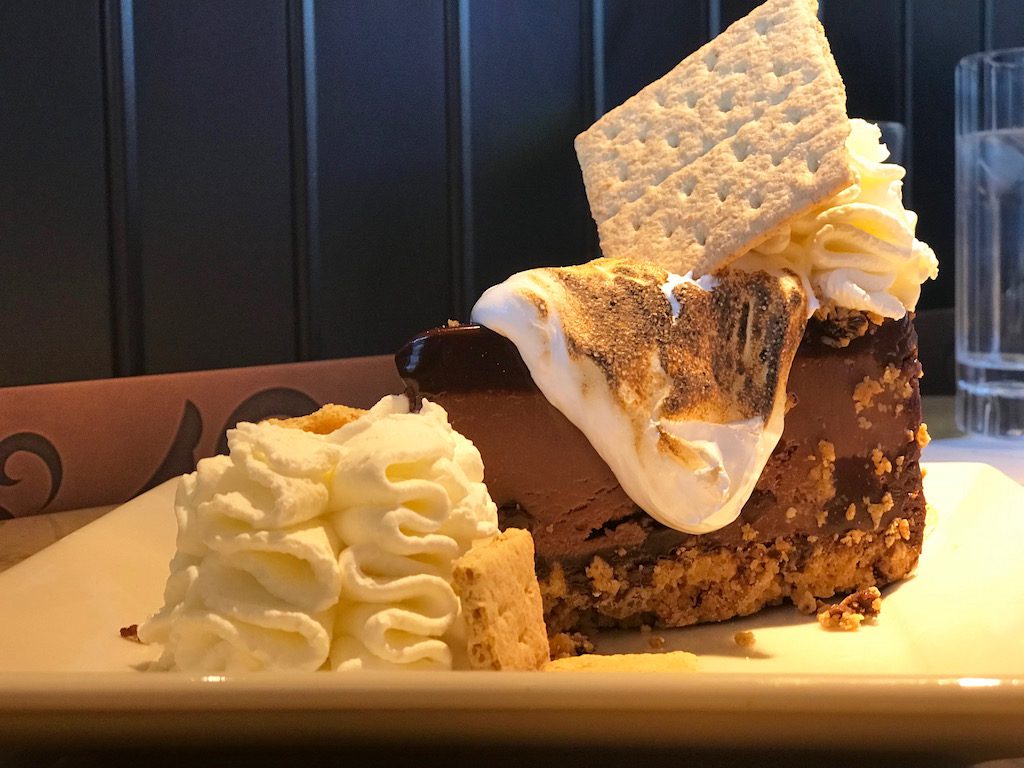 Some friends have already asked me how the prices compared to the US locations. That Chicken Parmesan rang up at $20.50. Which is a surprise given the size of that dish! The Jambalaya comes in at $25.95 and Miso Salmon is on the higher end of the scale at $28.95 but keep in mind the portion sizes and sharing. As for the Celebration Cheesecake and the S’mores cakes we had, each came in at $9.95. The cocktail menu is pretty standard with my very pretty Strawberry Martini costing $13.50.

Keep your eyes open here as you experience it for yourself, whether it’s your first time or not, you’ll notice something different. Oh, and wear your stretchy pants!

The Cheesecake Factory is at Yorkdale Shopping Centre in Toronto. Open daily. No reservations unless you’re a party of 10 or more. But go, put your name on the list and go shopping while you wait. Does it live up to all the hype? We think so.