I am sure that most of you are familiar with the story of Stone Soup, an old folk tale in which hungry soldiers persuade local people of a town to give them food by promising to make soup from nothing but a single stone and water. Intrigued, the villagers watch the men cook the “soup” and eventually begin contributing a little scrap of this and a little scrap of that until they created a hearty soup big enough to feed a village. All from a few leftover scraps.

I thought about this soup while I was cleaning out my fridge this morning; it was so full and yet there didn’t seem to be anything to eat. So instead of tossing those wilted veggies, I decided to give them a second chance to make something of themselves. I decided to make Stone Soup.

Besides Stone Soup, I’ve heard it called everything from leftovers soup to refrigerator soup to simply vegetable soup. The name isn’t important. What is important is that it’s healthy, versatile, and so super-satisfying to those of us out there who are *ahem* frugal. The best part is you can put in whatever Motley Cru of veggies you’ve got lying around and it will always be delicious…as long as you follow this simple formula:

Heat 1 tbsp. olive oil and 1 tbsp. butter in a large saucepan. Then sauté 1 chopped onions until translucent. You could also used shallots or  leeks. 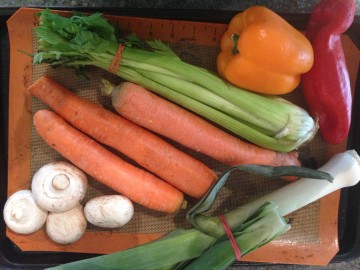 You’ll want around two cups of whatever you’ve got. Toss it into the pot along with a pinch or two of salt and pepper. Stir it up for a few minutes over medium heat.

When the veggies start to brown a bit, add in 4 cups of veggie or chicken stock. Bring to a boil, turn down the heat, and simmer, covered, for about 20 minutes.

Toss in 1/2 cup of something starchy to thicken things up. Like potatoes, red lentils, or rice. Simmer for another 20 minutes or until everything is cooked and nicely mushy.

Garnish with something to contrast the soup. A scoop of Greek yogurt if you like hot/cold. Croutons if you like crunchy/smooth. Chives if you like raw/cooked. Or all three if that’s what you’re into. 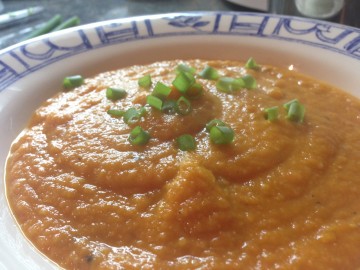 Eat with a hunk of fresh baguette, a grilled cheese sandwich, or simply your spoon.

So there you’ve got it. The most specific, non-specific recipe that guarantees the perfect bowl of soup. Every time.

What’s the craziest thing that you’ve put in your Stone Soup?