I recently had the opportunity to sit down and talk with Hayley Wickenheiser, Canadian hockey player and Olympic hero.

I have  a question from two 8 year old hockey playing girls who want to know when you knew you wanted to be an Olympian?

I was 10 years old and went to the ’88 Olympics in Calgary. We grew up in a very small town and my parents thought it was important to see the Olympic Games since they were so close. I left the ’88  games with the dream of being Matti Nykanen, the great Finnish ski jumper. I went back to Saskatchewan and tried to build a ski jump in a hayloft. I knew I was going to go to the Olympics, I just didn’t know what sport.

What’s the most important character trait of an Olympian?

You’re not what you do. I think that’s important whether it’s sport or business or life. When I was 19 years old we lost in the Olympics and I thought losing meant failing as a person too. Now I see it as separate; yes, I’m a hockey player, but I have other things going on in my life.  My identity isn’t wrapped up in winning or losing. I couldn’t say that when I was younger, but I’ve learned that through sport.

We know about a lot of what you’re good at. What’s something that you’re not good at?

Patience. I don’t have very good patience.  (laughs) I play the piano, but I wish I was better. I wish I was a better musician and was able to play in a band. I also wish I was better at research and writing, because going back to school to complete my degree after sixteen years was painful!

You’re pretty modest because you are interviewing for med school right now.

Yeah, I just had an interview the other day. I wish I’d done better on my MCATs! I’ve always liked medicine since I was a kid. Hockey and med school were the two things I saw myself doing. I like the action, and I think practicing medicine is one of the few things that could be like what it’s like to play hockey; being on a team and having goals you’re working towards, pressure to perform, never the same thing twice. It’ll be a good thing to replace hockey.

How do you see your responsibility as a role model to girls?

When I was growing up if you were a girl you were a figure skater. Girls didn’t play hockey. I had to change and hide out in the bathrooms and pretend I wasn’t a girl so nobody knew. Now it’s so common to see a girl with a hockey bag and stick going to the arena. Every Olympics we see a huge jump in registration numbers for girls hockey…it almost doubles. It’s important that we show girls that whatever you dream you can do in life.

Who were your heroes?

I grew up watching Messier and Gretzky and the Oilers of the 80s, so they were my hockey heroes. Otherwise I admire a lot of people. I don’t know if they’re heroes, but I love meeting people and hearing their stories and being inspired by what they’ve done. You can take a little bit from everyone you meet.

Is there one person you’ve met who really inspired you?

I spoke at an event right after Bill Clinton one year, and I’d always wondered what he’d be like. I got a chance to have a really long conversation with him which was really cool, and I found him to be incredibly smart, charismatic and someone who was genuinely a nice human being.

We’ve heard about med school plans…what else are you planning for?

I’d like to play one more Olympics. I’ll take it year by year at this point, but the World Championships are next year in Sweden so that’s the next big hockey event.

I asked her about her ideal pre-game meal.

For a pregame meal I’d eat something along the line of chicken, rice and a vegetable. Some kind of lean protein with rice or quinoa. I’m not a big pasta eater. These little Protini snacks are ideal. It’s important to get protein in before you train and a little carbs.

More importantly, especially for kids, is what you eat right after. You need to refuel with protein and carbs. The Protinis Snack is a complete protein so it has all the essential amino acids that fish, eggs or peanut butter would have. What’s important as an athlete is being able to eat well and eat on the run. Rarely have I seen a healthy snack option that has 11-15 grams of protein in it like this one. If kids learn healthy eating habits at a young age, they’re more likely to continue as they get older.

I took one of these on the plane with me to see if it would make the four hour flight from Calgary to Toronto, and it did. The flavours are good and it’s a really good product. It makes it easy and accessible.

As a mother and an athlete, Hayley is happy to share results from a new survey of Canadians revealing that snacking is top of mind and people are still looking for convenient, healthy options: 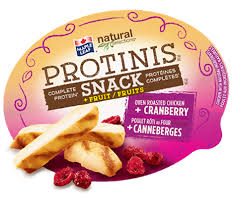 · 71 per cent of Canadians are seeking healthier snacking options

Complete protein snacks contains all nine essential amino acids your body cannot produce on its own and helps to build and repair muscle. Other proteins, like nuts, vegetables, most grains and most legumes are missing one or more of these essential amino acids.  Hayley has been turning to Maple Leaf Natural Selections Protinis.

As a mother, a hockey player, a student and a spokesperson, I trust Hayley to know what to eat to keep my energy up!