You are here: Home / Life / Food / Applesauce: An Encore Perfomance

Just about two years ago I wrote this: one of my very first posts for Urban Moms. It was a simple, yet delicious recipe for applesauce. In it, I explained that each year on the Sunday closest to my birthday, we went apple picking as a family and with our bounty, we made crumbles, cookies, and of course the sauce.

While finalizing the plans for the weekend, it never even crossed my mind that my kids would miss apple picking. I honestly thought that they didn’t even like it anymore; that they went along with it because I made them. But I was wrong. They like apple picking. So much so that they hitched a ride with my sister and her kids. You should know that my sister has four kids between the ages of 10 and 2, three of them being girls. If that doesn’t prove my 14-year-old son’s dedication to the sport of apple picking, I don’t know what does.

And when I came home on Sunday evening, this is what was waiting for me: 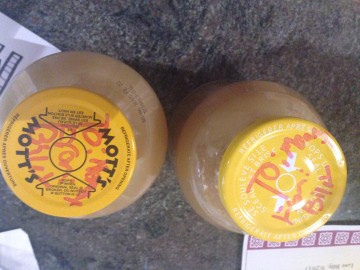 My birthday present from my son: two jars of homemade applesauce he’d made for me using my recipe and his apples.

My little apple hasn’t fallen far from me, the tree.

Macintosh and Cortland are your best bets for awesome applesauce

½ tsp cinnamon (or to taste)

Mix water and brown sugar in a medium saucepan & stir.

While the sugar & water are warming, peel, core, and cut your apples into chunks.

Add apples to the saucepan and bring up to a low boil. Turn down the heat a bit and let simmer for about 20 min, stirring occasionally, or until your apples are really soft when you poke a fork into them.

Remove from heat, add in cinnamon, and using the hand-blender, puree until smooth. Taste & add more cinnamon, if you want.

Let cool and pour into clean glass jar. This will stay good in your fridge for about a week or so…if it lasts that long.