You are here: Home / Life / Family / The Good, The Bad, The Ugly Of Sickness

It’s 7 at night. I’m in bed. Fresh sheets and a bath. My mom always said nothing makes you feel better than that combo and she was right.

We’ve had a crappy couple months in the sick department. Nothing tragic or serious but just a constant trail.

I had the flu/laryngitis before Jamaica. Will carried that to the tropics with us. He kindly returned it to me on the trip home. Then he had a raging fever, followed by his whole hospital, almost casted, saved by HSP dilemma. Bookended by another raging fever. Two days later, I had my glands explode. Today, four days later, relief with antibiotics for strep. So none of this is earth shattering. It’s just a lot to take on in two months. Ooooh right. Don’t forget the lego swallowing.

Anyway. It’s made me realize a few things over the course of the couple months. Let’s call it The Good, The Bad and The Ugly of Sick.

Let’s end on a positive note and go with the Ugly first.

I have an admission to make. I’m a cold-hearted bitch. Well. I’m just not a very compassionate mom. When it’s 2am and he’s had a nightmare, I’ll rub his back for five minutes and then I start to lose it. I’m not very patient with prolonged tears over bumps and bruises. I’m more of a ‘suck it up’ kind of mom. Which is RIDICULOUS since I’m an overly dramatic sick person. But it is what it is. I’m just not. I’m trying. But I think compassion is engrained. You have it or you don’t. My sister has it. A few of my friends have it. AND a few of my friends are in my camp. It is what it is – but it’s UGLY. 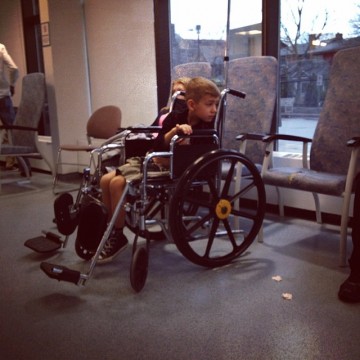 But. When I took Will to the hospital, for what we thought was a broken knee, I was filled with compassion. I wanted to reassure him that everything would be okay. When I saw his face crumple when the ER doctor said ‘cast’ I wanted to scoop him up and smother him with kisses until he knew everything would be okay. So as BAD as it is that I’m a bit of cold-hearted bitch, I feel better knowing that when it comes to big stuff, I actually am maternal. I actually would give my life for his. In a nano-second.

Now for the GOOD. Will and I have been having our struggles over these last months, on top of all the illness. We just don’t seem to have our groove at all. There’s lots of fights and talking back (him) and tears (me). But this weekend, he was back. Saturday when I got sick and our plans changed, he didn’t freak out. He listened and he helped. Sunday night, we got home from my dad’s and he could see I was not doing well. ‘Mom, I don’t have to have a bath. Let’s just lie in bed and I’ll read to you.’ He got on his own jammies, brushed his teeth, and read me Scaredy Squirrel. We were both snoring within ten minutes.

The next morning, he got himself dressed, packed his overnight bag to stay with my sister, got his own breakfast and got his school bag ready. Then he covered me with one of his blankies and told me to feel better. He scratched my back. He smothered me with kisses and told me I was his favourite person on the planet. He was beyond compassionate. Obviously, he did not inherit this from me.

So. Even if tomorrow night, when he comes home and he is back to his old antics, I know it’s a phase and my sweet boy is still in that scrawny, adorable body. It may not surface all the time, but as long as I know it’s there, I’m cool. It almost makes all this sickness worth it. ALMOST.