Work-life balance in this day and age seems as attainable as owning a rainbow coloured unicorn. It’s something people high up in organizations seem to give some lip service too, but in practice? It seems like it hardly ever plays out the way it’s promised to, or at least desired to.

It certainly doesn’t help that we have Yahoo! CEO Marissa Mayer forgoing the maternity leave to which she is entitled—and let’s be honest, she of all people can afford to take the time. What does that tell us moms who work outside the home?

Sure it’s fine to say you should strive for work-life balance, but when CEOs of companies set the example of returning to work right away, they’re setting the expectation that people who are committed to their jobs, return to work as soon as they can. That’s not work-life balance.

So when someone in a position of power puts their money where their mouth is, it sets an important precedent and example; it’s okay to say ‘this time is for my family’ and mean it.

Late last week, Environment and Climate Change Minister Catherine McKenna made headlines. (It’s sad that this is headline worthy. But that’s really the point, isn’t it?) McKenna told her staff that she will be punching out every day (except for Thursdays) at 5:30, so that she can be home for dinner with her three children and help them with their homework. 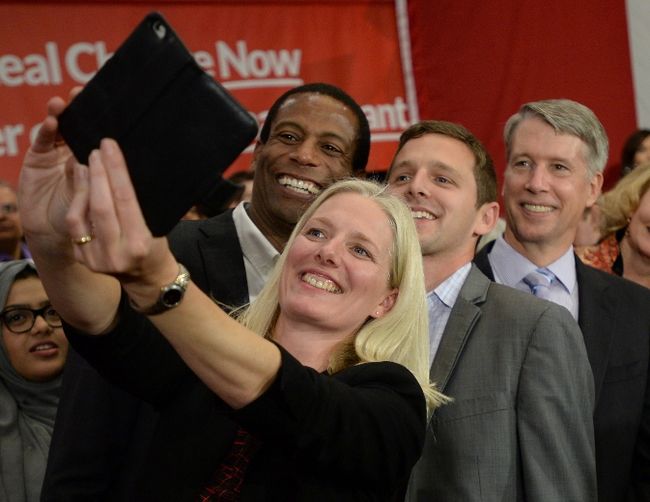 “I am not going to be a good minister unless I’m happy at home and my family’s happy and there’s some balance,” she told the Star.

“I’m very happy to work late, and you certainly work very long hours,” she says. “But it’s really important to my mental health to be able to know I can be home and check in with everyone and in that time, I’m not available.”

And there it is. Action. Not words. Instead of McKenna telling her office there needs to be work-life balance, she is setting the example and the expectation of what that actually means. It doesn’t mean forgoing one for the other. It simply means organizing your life in such a way that you don’t exhaust yourself doing one, to the detriment of the other.

“Traditionally, Parliament Hill is a place men go for power and families go to die,” the Star wrote. But I don’t think that’s unique to high power government officials. In my informal survey of my own personal network, that feeling, the feeling of increasing responsibility as they ascend within their chosen careers, added to the pressure of fewer people in workplaces to spread the work around and higher demands from the top to perform, leaves most people I know feeling exhausted and stretched thin.

McKenna’s announcement shouldn’t have been earth shattering or ground breaking or news worthy. But leaving work at 5:30 to be home for dinner with her kids and be a family was such a divergence from what is usual and expected that people everywhere are talking about it.

The idea of work-life balance needs to be given more than just lip service. It needs people in power and control to stand up and set an example of what that actually means.

Maybe if enough women in leadership positions are encouraged to, empowered to, and inspired to leave their desks in time to be home for dinner, and if they in turn encourage their own staff to follow suit, maybe announcements like McKenna’s won’t be front page news anymore. Maybe it will simply be a given that a parents’ place, at least on as regular a basis as possible, is at home at the dinner table with their families.