My dog died the other night. It was shocking but not surprising considering her fulsome life. I basically eulogized her here, so I will not again (ok a little bit) but as the category above suggests, this indeed was a life event.

Two things stood out about Alice’s passing. First, my eldest son, while devastated losing the only true pet he has ever known, was stoic in his resolve to say goodbye. Alice had a cardiac arrest on our back porch, so death was quick, but not immediate. There was a brief window where the three of us (Tasman was sleeping), through our own personal histrionics, could say goodbye. Steph and I immediately tried to force Hudson to return to his room and let us deal with this, but he demanded, through streaming tears, that Alice was his dog too, and he needed to say goodbye. He wanted closure, he didn’t call it that, but we knew we couldn’t deny him his own personal relationship right. She was his dog too, he proved it by grooming her, feeding her, walking her, just lying down with her for the comfort of closeness she always provided.

And I tell you this; I will never forget the image of my lanky son, topless in plaid pajama bottoms, lying on my back porch saying goodbye to his dying dog. 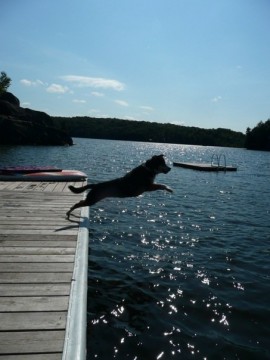 The other thing that stands out is after loading her in the back of the car, neatly wrapped in a favourite orange blanket, I began driving to the emergency veterinarian to figure out what we were supposed to do now. I reached out to turn on the stereo as you do when driving alone, but I stopped. There was no way in hell I wanted any song to be the song that I would remember forever because what I was doing, where I was going. I didn’t want something apt like Everybody Hurts or Comfortably Numb or anything ironic like Don’t Worry, Be Happy or Walking on Sunshine.

The end was clinical and expensive. I picked a basic cedar box to have her ashes returned. We will have a tiny ceremony at the cottage for her. She loved it up there, and as my dad said in a nice note, she was certainly part of the landscape of Three Mile.

I stayed with her for about fifteen minutes in a steely examination room. My own closure. She was still warm, her feet still smelled like nacho cheese Doritos.

I just thanked her over and over again.