I am not a religious person. I’m famous for saying, ‘I don’t know — God, Jesus, whoever,’ because instead of paying close attention in Sunday School, I was thinking about helping to serve the coffee to the adults after the service. I did love going to church with my family, though. I once placed second in a church choir singing contest (and I still have the certificate). There were only two of us but hey… not bad.

What I loved about our church was the community. All the neighbourhood families went. It was a strong focus in our neighbourhood. When I first had Will, I thought I should go back to church. I figured it was time to really educate myself and I wanted him to have that same sense of community. Well, as I soon realized, Sunday mornings are too dreamy at my house. It tends to be the one morning of the week where we aren’t rushing to daycare or swim class. It quickly fell from my list of ‘plans’ for Will.

A year or so ago, Will did attend church with friends of mine. He told me he was bored but, like always, apparently he soaked it up like a sponge. He mentioned a few things right after and then all was quiet on the God front until last week.

We were riding our bikes, pretending to bike away from dinosaurs (I recommend that if you want your kid to chop chop) and he asked where we come from. I said, ‘Dude, we’ve talked about this before.’ And he said not babies, but all humans.

Ummm. As I was formulating my response. He said, ‘actually, I know we all came from God.’ Say WHAT? I said, ‘okay, some people believe that. I’m not sure that I believe it though.’ He said that he did. And I said that was fine. Which it 100% is. I left it and filed it in the ‘think about how to handle’ file.

The next week, he and his friends went to see the Lemur movie at the Science Centre. Will filled me in that lemurs survived the Big Bang and ended up on an island off of Africa (a.k.a Madagascar) and morphed into who they are today. So, ‘MOM! They lived with the cavemen. Isn’t that so cool.’ I thought it was a good idea to plant the seed in his head that we may have originated from these ‘cavemen’ as opposed to being created by God. I didn’t want to dissuade him, I just wanted him to have a couple options for his thinking.

He didn’t really respond and I just left it.

Last week, I was teasing him that he couldn’t grow up any more. He told me he was going to ask God to make him seven right away.

How do I break it to him that God’s not a magician? Because really, if he thinks God is a magician, how can cavemen compete with that? 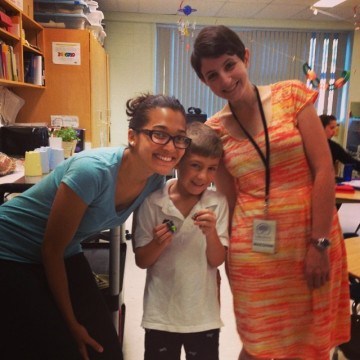 I think I’ve decided to all let it slide right now. Will and I get our community from our neighbours. It is an incredible ‘hood where we live. I feel like Will is being raised by me and the slew of families we hang with, his daycare workers and the teachers at his school. I don’t feel a driving need to take him to church right now. I also don’t feel an urge to get to deep into where we came from.

I know my kid. He’ll research the crap out of it (is there a Lego The Bible set?) when he gets older and make up his own mind. Maybe I’ll join in on that research and see where it leads me as well.

How do you handle these questions with your kids?

“Stop making that noise, it makes me want to throw squirrels.” The sound of crackling plastic was driving my husband to the point of rodent … END_OF_DOCUMENT_TOKEN_TO_BE_REPLACED

Summer used to be magical. The hot weather, the outdoor adventures, the complete and total lack of responsibility. School was over for the year and … END_OF_DOCUMENT_TOKEN_TO_BE_REPLACED