You are here: Home / Life / Accident Avoided (By Just a Few Inches) 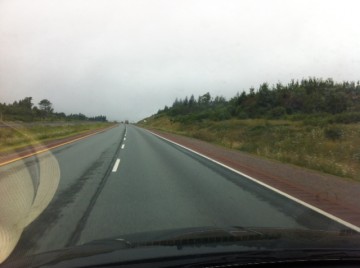 Have you ever had your life flash before your eyes? It’s never happened to me before until this past Sunday. I came pretty darn close, and it’s amazing how fast things really do flash before you. One minute I was sitting in the kitchen with my kids and in-laws, and next minute I was just inches away from a head on collision. Fortunately for me, fate was on my side but I gotta admit I was a little shaky afterwords.

Here’s what happened. My wife forgot a recipe at her sister’s, I know what you’re thinking… how come all great stories start with someone trying to hunt down a recipe? Anyways, my wife and her sister were knee deep in raw chicken when they realized they forgot the recipe. Like any good husband, I did as I was told, and I went to get it. Luckily, the house is right around the corner and figured I’d be back before the commercials were over and I’d be watching football in two shakes of a lamb’s tail. By the way, that is the first time someone has ever referenced football and used the expression “two shakes of a lamb’s tail” in the same sentence.

I drove to my sis-in-law’s, her husband left the recipe on the porch so I barely had to stop the car. I started my drive home and that’s when it went down. As I approached the intersection I noticed there was a car waiting to make a left, I had the right of way since I had the green light. As I drove through the intersection, the driver went from waiting to make the turn, to making the turn. It all happened so fast; I went from a leisure drive with a recipe riding shotgun, to being inches away from a head on collision. It’s one of those moments where your instincts take over. I cranked the wheel to the right to avoid the crash (to be honest I don’t know how I didn’t get t-boned). I then had to crank the wheel to the left to avoid from driving face first into the light standard. I am so thankful someone wasn’t standing at the corner waiting to cross the street. I’m also so thankful my kids wern’t with me and that I drove away with no serious harm done, well except I probably put a few kilometers on my heart.

I have to say, being in a car accident or even just avoiding one, is one of the scariest things a person can go through. I don’t know about you but it leaves me with that sick feeling in your stomach, then the legs get all light, and my hands can’t stop shaking. It was pretty scary and I’m just so fortunate that no one got hurt. When I got home I gave my kids a big hug and wife a big kiss. The other thing I did? I had a big ol’ piece of apple crumble with ice-cream to calm the nerves – why not right? It’s moments like that where you appreciate everything you have because you never know when it’ll be taken away. So if you take anything form this blog today, I hope it’s that you give your family an extra squeeze next time you see them and you enjoy a big piece of apple crumble tonight.