You are here: Home / Life / Holidays / A Christmas Tradition

For my kids, each December 1st brings with it the excitement that Christmas is ever closer and holiday season is in full swing.
The house is decorated. Presents have been purchased. Cranberry candles are burning. Christmas baking has begun (the gluten free kind…don’t get too excited, kids).

December 1st also brings with it our annual visitor. For the past several years, Tony Hawk has spent the month of December with our family. He isn’t one of those naughty elves that fill up Pinterest boards or Buzzfeed lists. There is no I way I could allow such behaviour from an elf. Cuyler would be all over that and in cahoots with the thing, thinking up ways to wreak havoc on the house.
No. No. Our elf just finds a new place to hide each night as the kids are sleeping. That’s the fun – finding him the next day.
Sometimes Tony has found such a comfortable spot that he forgets to move after the kids go to sleep. That’s ok. We don’t mind.
The very odd time, when the kids are behaving like dinks and I’m at the end of my rope, Tony will go to the North Pole and report to Santa. That typically happens once a season.

This year things are a bit different. We have a dog now. 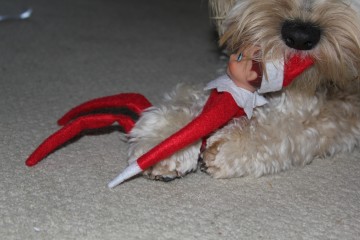 More importantly, Tony has a partner in Christmas. 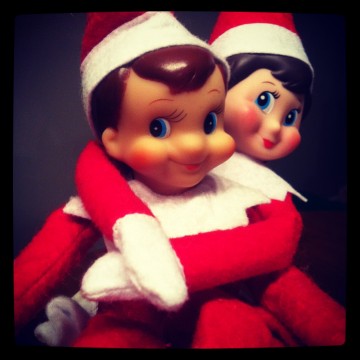 We didn’t know who she was. They just showed up together.
Was she his sister? Wife? Friend?
The kids would have to figure that one out.
Cuyler came down and found them, each sitting in a candle holder, arms linked.
He exclaimed “Tony has a girlfriend! He’s not alone!”
We then knew  that she was his girlfriend. But what was her name?
Cuyler chose 3 names, wrote them down and we were to vote as a family.

Vanessa won the vote. So there we have it. Tony has a girlfriend and her name is Vanessa.
She came in like a wrecking ball! 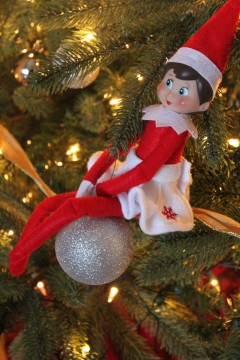 Just kidding. She didn’t. But I couldn’t resist. 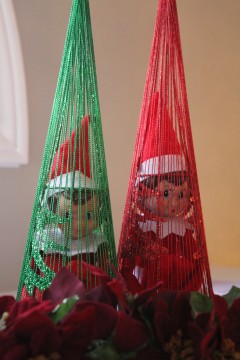 Our elves are simple elves, who just hide in random places around the house. I don’t worry about having to think of fun, funny, witty, mischievous antics for these two felt folks get up to or into. Eva especially loves that we have a girl elf now! She loves that Tony is in love! 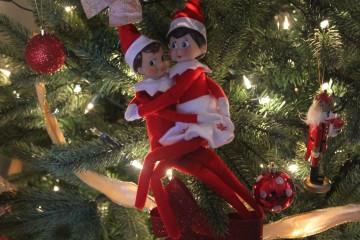