You are here: Home / Entertainment / Wicked Is Coming!

I know a few people who are anxious to see WICKED return to the stage here in Toronto. Well, not to worry… Broadway’s biggest blockbuster hit returns to this city September 3 to November 2 at the Ed Mirvish Theatre. Tickets will start going on sale Monday, May 5th. Mark your calendars! Save the date!

Wicked tells the story long before Dorothy drops in, about two other girls who meet in the land of Oz.  One – born with emerald green skin – is smart, fiery and misunderstood.  The other is beautiful, ambitious and very popular. Th play tells the story of their remarkable odyssey, how these two unlikely friends grow to become the Wicked Witch of the West and Glinda the Good.

With music and lyrics by Stephen Schwartz (Pippin, Godspell, Academy Award® winner for Pocahontas and The Prince of Egypt) and book by Winnie Holzman (“My So Called Life,” “Once And Again” and “thirtysomething”) based on the best-selling 1995 novel by Gregory Maguire, this  musical is always a crowd pleaser. 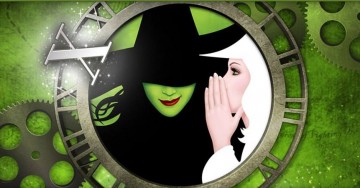 Wicked is directed by two-time Tony® Award winner Joe Mantello (Take Me Out, Love! Valour! Compassion!, The Vagina Monologues) and features the musical staging of Tony® Award winner Wayne Cilento (Aida, The Who’s Tommy, How To Succeed…). Wicked itself is the winner of over 50 major awards, including a Grammy® Award and 3 Tony® Awards.

Wicked currently has nine productions around the world, in New York, London, Japan (Tokyo), Australasian Tour, South Korea (Seoul), Latin America (Mexico City), a U.K. Tour (Dublin), and two concurrent North American National Tours.  Since its New York première a decade ago, Wicked  has grossed over $3.3 billion worldwide and has been seen by over 40 million across the globe. Wicked has been performed in over 100 cities in 13 countries around the world and has thus far been translated into five languages: Japanese, German, Dutch, Spanish, and Korean.

For more information about Wicked (and a few fun things, like Elphaba-ing yourself !) visit www.wickedthemusical.com