You are here: Home / Entertainment / What’s in a Name? A Beef, as it Happens…

Earlier today I was reading Katya’s post about the – ahem – interesting posters for the new movie, Nymphomaniac, starring (among other A-listers) Shia LaBeouf. Go check out the post (and in particular the gallery) – it looks like a very interesting film and no joke: the cast is incroyable. 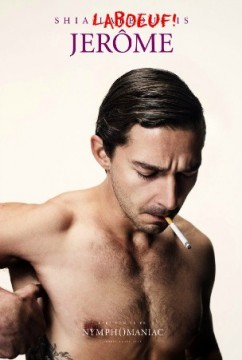 But as piqued as my interest is by the film, my nerves are piqued by the spelling of Shia LaBeouf’s last name. I have, you might say, a beef with it (chortles). Now, for those of you who dropped français at the first opportunity, let me enlighten you a little: your favourite hottie’s last name means (well, probably anyway) the beef. Yes, you read that right. Or… at least I think so. You see there is a word in French that looks suspiciously like Shia’s last name, and it goes like this: B O E U F. Boeuf. Boeuf=beef. So when this particular actor made his debut and I first heard the name, I was all like, “oh that’s classy! *sarcasm font*” and then when I first saw it printed on a poster I was all like, “ZOMG! He spelled it wrong! LMFAO!” (Yes, I even think in internet shorthand. WTF.)

But a quick trip to imdb.com proved that Shia did not (as I had originally suspected) invent or adopt his  last name in order to sound hotter(?). Shia LaBeouf’s father did indeed carry the same moniker, and well… I’m just not interested enough to dig any further back than that. (My research methods are strictly one-click, y’all.)

Suffice it to say that somewhere along the line someone in Shia’s family failed an orthographie test, because where I come from, it’s spelled boeuf, and there ain’t no word (in English or French) that’s spelled B E O U F. I see his name and I want to say, “la bee-oh-oof”, because it just doesn’t look like the word I know as boeuf.

But, le sigh. The things I am subjected to by the popular culture!

Am I the only one who cares about these kinds of things?

Because, truly: these are the crazy things that bother me. Like people who name their kids Micheal. And there are many of them, and I can only think that the first one (the ‘index Micheal’ if you will) was the mistake of a poor-spelling or dyslexic parent with good intentions who thought they were giving their little boy a classic and lovely name (and for the record, I do think Michael is a great name).

I once had a friend named “Mecky” for much the same reason. As the first child born in Canada to illiterate Italian immigrant parents with thick accents, “Mecky” was what wound up on her official birth certificate (scribed for them by a no-doubt well-meaning maternity nurse) when her parents tried to say, “Maggie”. Not knowing how to read or write themselves, they had no way of knowing the nurse had gotten it wrong.

So anyway. Perhaps I should go a little easier on young Shia. Maybe somewhere back in his family tree (there for the finding by a more careful researcher than me, no doubt) there is an illiterate French immigrant who tried desperately to say, “Non, non! Mon nom est LeBoeuf, monsieur!” to a non-francophone immigration officer at Ellis Island, who was just trying to write the damn names down and go home for the day.

And darned if those French words with all their vowels aren’t wickedly hard to spell anyway. I mean, who puts three different vowels in a row in the first place?