I can recall the first time I saw The Lion King on stage very vividly. The animals breathe life in the most awe-inspiring ways, it takes your imagination beyond the well-loved Disney story. A review cannot do it justice; you really need to see it for yourself. The Lion King has returned to Toronto for another spectacular run and judging by the audience on opening night, it will no doubt be another home run for adults and kids alike.

The story is a well-told one; based on the concept of “Circle of Life” it is approachable way for youngsters. Set against the African plains the story follows the life journey of Simba, a precocious lion cub who is heir to the throne. When he faced the devastating loss of his father, Simba runs away and befriends the most unlikely characters. Together they survive the wilderness and eventually, he returns home to face his uncle and claim his rightful place.

The story is told through song, dance and masterful puppetry. I’ve seen this stage production several times now but watching the actors in animal puppetry mechanics in motion is nothing short of incredible. You have the sense that the actors and the characters they play are truly in sync. They are one as they glide and prance. Every facial expression and breath is mesmerizing to see. Directed by Julie Taymor who brings her unique talents and vision to the stage.  I was surprised to learn that Taymor studied Bunraku puppetry in Japan, a truly fascinating art form in itself!

The production is stunning with African influenced music and dance combined with modern interpretations. The weeping lionesses is an absolutely moving moment in the play. I never imagined that I would well-up  during a Disney based production but perhaps as a mom myself, it touches my heartstrings a bit deeper than before. 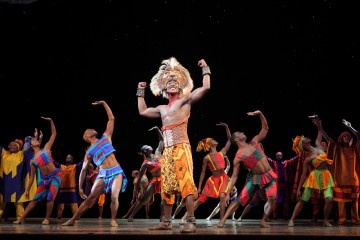 Jelani Remy as “Simba” and the ensemble in “He Lives in You” from THE LION KING National Tour. ©Disney. Photo Credit: Joan Marcus.

King Mufasa (L. Steven Taylor) has that deep and powerful voice that only a king could possess.  Scar (Patrick R. Brown) delivers the perfect villainous uncle seething in evil thoughts. Jolly Rafiki (Brown Lindiew Mkhize) the future-predicting baboon entertains and brings hope. Timon (Nick Cordileone) and Pumbaa (Ben Lipitz) are absolutely loveable and characters and yes, you want to run to the gift shop during intermission to find whatever you can to take home the magic. Absolutely incredible is Jelani Remy who plays the adult Simba. He leaps with all his might and gives an incredible performance without missing a beat.

While the script follows the motion picture accordingly, there is also some additional material that gave us a few extra bits of unexpected laughter. I totally expected the belting out of the song Can You Feel the Love Tonight but enjoyed the softer, more innocent take on the song performance. I realized I only wanted them to sing it louder for my personal desire to sing along. LOL Hey, hakuna matata, right?

The Lion King is always a smash hit and totally worth going to even if you’ve seen it before.

Now playing at the Princess of Wales Theatre (300 King Street West)  in Toronto until June 15th. For tickets and more information visit www.mirvish.com