What inspires people to serve their countries?  From family traditions to a desire to see the world to the urge to do our part – there are so many reasons. No doubt that each country is grateful for the countless men and women who have dedicated themselves to serving and protect others. They are truly the brave and they have so many incredible stories to tell. Wait. They aren’t stories.

The Two Worlds of Charlie F. – the current stage production playing at the Princess of Wales Theatre in Toronto. The play is about the lives of people who have experienced war. It’s not about war itself but about the people and a moving experience that goes beyond any stage of movie shown on screen.  It’s also a unique performance played by several wounded service personnel from around the world. They are here to give us the human side of war.

The Two Words of Charlie F. is the soldier’s view of service, injury and recovery. It’s very personal answering some of the thoughts and questions that run through our minds and would find awkward to ask. It’s a peek inside their lives and the people around them — but done with a bit of humour as well. 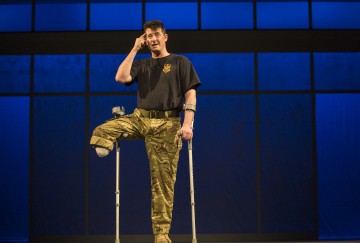 Last summer I had met with Canadian lead actor Cassidy Little, who plays Charlie Fowler. I can recall his appearance as what I refer to as a “good Canadian boy” look. A tall, hunky, good-looking guy with a hockey player built. He was charming and quick with his witty lines. He had mentioned that he had studied performing arts and ballet then did some stand-up comedy in Britain but he ended up joining the Marines (as a result of a bet) which changed his life. During his second tour of Afghanistan, Cassidy was injured in the line of duty losing his right leg.

So, this show… I knew it was going to be a very thoughtful one. Deep breathes. In the past year, I had a chance to  screen a documentary about military personnel returning from the war. It was about the people who were physically injured and many who were living with post-traumatic stress disorder.  It had opened my eyes to the meaning of the human spirit and what it means to keep calm and carry on.  I’ve always been drawn to human stories and fascinated with what motivates us as a human race. And in this play, I was reminded once again about the cost of war and that we are all in this world together.

The Two Worlds of Charlie F. was first created in December 2010 by producer Alice Driver. The idea began as a project to bring the two worlds of theatre and military together, providing work placement for wounded, injured and sick military personnel and to develop a play that was based on their personal experiences. Its objectives were to boost confidence, self-esteem and to give a voice to this group of individuals and provide work experience opportunities. The process of creating and staging this production was fully evaluated by Leeds Met University – it showed that the original objectives were surpassed and for many of the individuals taking part the experience was life changing. It was also the first time that the British Ministry of Defence has allowed a theatre company access to their wounded soldiers and led to workshops and interviews with the service personnel wounded from the war in Afghanistan. The information led to this play written by award-winning poet and playwright Owen Sheers in partnership of the Theatre  Royal Haymarket Masterclass, The Royal British Legion and Defence Recovery Capability. The play was sold out and received high praise for it’s raw and emotional performances. It was also awarded an Amnesty International Freedom of Expression Award.

The show has since evolved and currently on stage at The Princess of Wales Theatre in Toronto until March 9th and will be followed by a UK Tour.

The Two Worlds of Charlie F. is part of the Off-Mirvish Series. For tickets and additional information visit www.mirvish.com

“Stop making that noise, it makes me want to throw squirrels.” The sound of crackling plastic was driving my husband to the point of rodent … END_OF_DOCUMENT_TOKEN_TO_BE_REPLACED

Summer used to be magical. The hot weather, the outdoor adventures, the complete and total lack of responsibility. School was over for the year and … END_OF_DOCUMENT_TOKEN_TO_BE_REPLACED