You are here: Home / Entertainment / The Lego Movie (and Game) Review!

Everything is awesome in the the world of LEGO. This opening weekend sent the film’s box office cashing in at a whopping $69 million in ticket sales. The LEGO Movie is the first-ever, full-length adventure film from Warner Bros. Pictures and Village Roadshow Pictures directed by Phil Lord & Christopher Miller (21 Jump Street, Cloudy with a Chance of Meatballs) starring familiar actors including Chris Pratt, Will Ferrell, Elizabeth Banks, Will Arnett, Nick Offerman, Alison Brie and Charlie Day, with Liam Neeson and Morgan Freeman.

The story opens with Emmett, an ordinary, rule-following, average construction minifigure who’s life (so long as he follows the instructions) is pretty predictable and awesome. His world turns upside-down when he meets MasterBuilder, Wyldstyle, and is mistaken for the most extraordinary person in the universe. Emmet gets swept into a group who’s determined to stop the “Kragl” from ruining their world. Lacking in confidence and intimidated by the leadership of others, Emmet swallows all his fears and joins in the epic journey.

The story lines plays well with the kids appealing to both styles of LEGO builders – ones that like to follow instructions and those who like to build with their imagination. Both get equal play time and the characters are seamlessly integrated. It also appeals to both adults and children who have a love for the building. I admit that I’ve thought about “Kragl” in the past…but received the same disapproval as shown in this film. LOL. Very clever this movie, I tell ya!

The LEGO Movie is a computer animated story all made of LEGO. EVERYTHING is LEGO. As an adult you can’t help to feel as though you’re going to be getting the “I wants” afterwards. Having attended a screening with 9 year old who is a big LEGO fan, you can just imagine how my wallet was already laughing all the way to the cash register. I was prepared this time. Haha! I admit that we did venture into the LEGO shop at Yorkdale after the film and checked out the new sets that tie into the film. Little guy was good at making notes for er….maybe Valentine’s Day?

As the movie progressed you start looking for familiar LEGO structures. Even Star Wars makes an appearance much to the delight of the audience of adults and kids. My son was excited to see City sets that he’s built over the past few years. So, what originally felt like “oh, it’s going to be a big commercial” turned into “cool, we made that!”  and you are absorbed into the characters of the film. 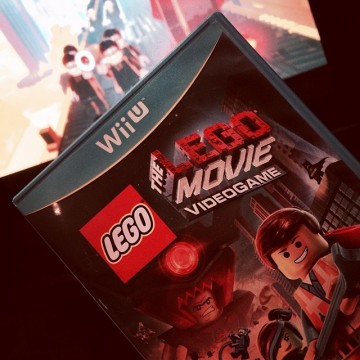 We both enjoyed the film and may return to see it a second time (hey, this winter is long and it’s a heart-warming fun film!) but we’ve had the opportunity to extend the film’s experience at home with The LEGO Movie Video Game for our Nintendo WiiU gaming console. The  game takes you back to all the familiar scenes in the movie and little guy couldn’t wait to get home to play as the movie left such a positive impression on him.

In The LEGO Movie Video Game, the player takes on the role of Emmet and joins in the adventures to save the LEGO world. With characters including Wyldstyle, Vitruvius, Batman and UniKitty you help conquer and unlock the challenges as individuals and as a group and just like in the movie.  Players need to collect red bricks and journey through the worlds like Cloud Cuckoo Land and preserve the “piece of resistance” among other tasks. There are actually over 90 playable characters in this game and 15 levels of play so kids will have no shortage of virtual building adventures!

Like the movie there are two types of building abilities that are used to play the game– by instructions and by creating on your own. My son is absolutely LOVING this game right now and while he enjoyed playing for a couple days before seeing the movie, he’s finding the story tie-in fun to re-create.

He’s raced into the school yard this morning and chatted away to his friends already about the movie and the game. I’m guessing we’ll be the popular house for  few playdates after school these coming weeks!

Here’s the official trailer for the movie…