You are here: Home / Entertainment / The Arts / Carbon14: When Art & Science Converge

Here’s a question that was presented yesterday. “How does the landscape change a culture, and how does a culture change the landscape?”

It’s an interesting thought because the two, believe it or not, can go hand-in-hand. At the highly-anticipated opening of the Royal Ontario Museum’s Contemporary art exhibition, Carbon 14: Climate is Culture, we have the opportunity to redefine the future of possibilities. In the media, we’re constantly reminded of environmental issues and it often appears as doom and gloom. But I often wonder, so what are we going to do about it?

I know that feeling of  “I’m small peanuts to make an impact,” or that the issues are overwhelming. It’s easy enough to turn a blind eye and go on about our daily lives because we all know our plates are overflowing.

But here is this exhibition that takes a different approach. It’s the first of its kind in the world. The Royal Ontario Museum Contemporary Culture and the Cape Farewell Foundation have brought together leading artists and scientists to spark a creative response to climate change and showcasing what resilience and hope for what the future may look like. It is sure to cause discussion in our homes as well as the world at large.

“Carbon14: Climate is Culture explores themes of a changing Arctic, the health of oceans, biodiversity and extinction, sustainability and new, clean technologies; and central questions of politics, economics and ethics.” David Buckland, Founder and International Director of Cape Farewell.”

Carbon 14: Climate is Culture, curated by David Buckland and Claire Sykes, is a culmination of a two-year project working with Cape Farewell. Artists, including film makers, poets and musicians met with scientists, economists and climate change professionals to discuss the issues surrounding climate change. As a result, this exhibition features 13 art installations from Canadian and international artists. Their mission, and passion, is to confront the facts of climate change and respond in creative ways.

This four month program is not only raises import issues with climate change  but it is also a festival and a celebration. During the exhibition there will be special events planned including performing art, musicians and guest speakers.

At the media preview I met up with Former Toronto Mayor David Miller. He is the current President and CEO of WWF-Canada. We met standing in front of a series of dark and haunting portraits of Inuit individuals. We both started conversing about how fascinating it was to learn that the individual studies in the photography installation were lit only with whatever device they had on hand. No fancy camera work or lighting. And we also learned that this is the only culture that jumped from the Stone Age to the Digital Age in one generation. We also spoke about how it’s important for the younger generations to see this and to engage in discussion. 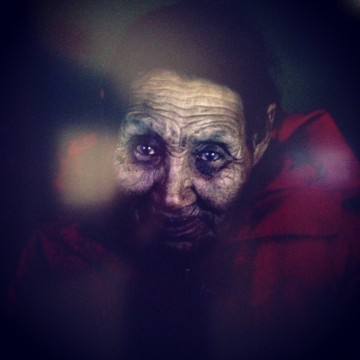 Photo Installation by Donald Weber at the Carbon 14: Climate is Culture Exhibition 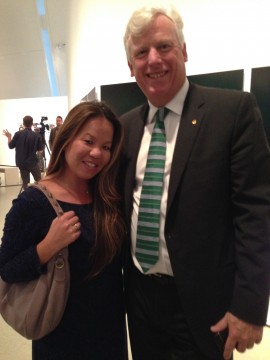