You are here: Home / Entertainment / So much TV, not enough time 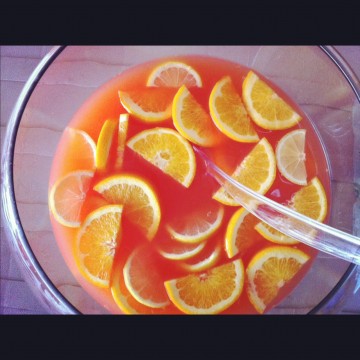 Todays topic is about TV.  I didn’t really have an appropriate picture to put on this blog, so instead I posted a picture of our famous Christmas Punch.  Now, on with the show…

Two words that are completely foreign to me are ‘season finale’. In fact, nine times out of ten I stop halfway through a season because I start hearing chatter about it through friends or online. And seriously, how can I blame them? Everyone wants to talk about it the next day, or it’s all over the internet; there’s no running away from it. I can’t exactly tell the world not to talk about how ‘Lost’ ends. I loved ‘Lost’ from the beginning but somewhere between season 1 and 4 we started having kids. Now I’m still am 2 seasons away from the final season. The final season aired in 2010; that’s 3 years ago!!! What’s wrong with me?

I know that we’re all busy, maybe I just don’t allot my free time properly? I don’t really golf, I haven’t played soccer since I broke my leg, so when I have a free hour or so I love watching TV. It’s just that when work and parental responsibilities are done, I’m done. Even if I do start watching a show, I’m asleep in minutes. Then the next day it takes me a while to try and find the spot where I left off,  so I give up. That reminds me, have you ever rewound a show to try and find that spot where you stopped the night before, and whilst rewinding you catch a glimpse of the storyline and it’s ruined? That happened to me once. ***Spoiler Alert*** it was that scene in season 2 of the Sopranos when the character “Big Pussy” from the Sopranos gets taken out on a boat for a “fishing trip”. That was brutal.

Thanks for letting me vent on one of my favourite topics, by the way, if you see me in the streets please don’t let me know who shot J.R. Gunna try and finish that show by Christmas.