You are here: Home / Entertainment / Rudolph The Red-Nosed Reindeer: Up Close And Personal

The holidays stirs up many nostalgic thoughts from my childhood. Since I was a wee little kid I remember pressing my nose against the Christmas windows downtown; following the Santa Claus parade with hot chocolate in hand in the city; and watching television shows like Frosty the Snowman and Rudolph The Red-Nosed Reindeer with my family. It’s a tradition that I continue to this day.

If you’re not familiar with the story, it’s about Rudolph the most famous reindeer in history. He had a very shiny nose. If you ever saw it, you would even say it glows. But all of the other reindeer use to laugh and all him names. They never let poor Rudolph play in any reindeer games. Then one foggy Christmas eve, Santa came to him and said “Rudolph with your nose so bright, won’t you guide my sleigh tonight?” Then all the reindeer loved him and that’s history. The touching story teaches kids that it’s those things that make you different that can be what makes you special. (Did I just hear you sing?)

I’ve recently found out that Rudolph The Red-Nosed Reindeer will be on stage giving the well-loved story a renewed energy for all ages. The musical will bring the television show to life with the familiar cast of iconic characters including Hermey the Elf, Yukon Cornelius and the Abominable Snow Monster who will help Santa save the holiday season. The show kicks off the holiday season this November 17 for one week only in Toronto with Mirvish Productions mirvish.com

Of course I wanted to check in with Rudolph to find out more. So,  I had a chance to chat with Lexy Baeza (aka Rudolph) as she leads the cast en route to Toronto’s Princess of Wales Theatre as part of their North American tour. 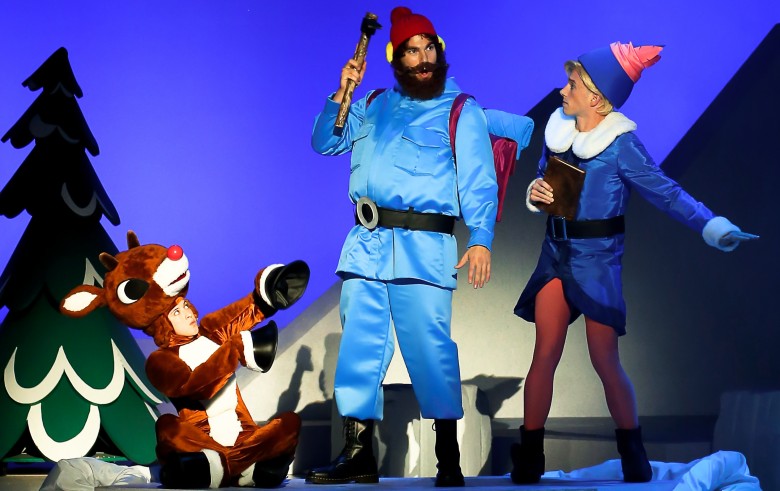 What’s it like to prance on stage in front of a live audience (instead of TV)?

Well, with live theatre, each show is different. That goes for audiences too. Some crowds are reserved and it makes us actors feel like we have to try harder! And on the other hand, loud and responsive audiences make our job seem a lot easier.

What do you love about live theatre?

There is something so intimate and exhilarating about feeling the energy of hundreds and sometimes thousands of people. And usually, they are happy people. Very few people come to theatre and stay in a bad mood throughout the show.

How do you keep your red nose strong and bright? You’ve got a lot of shows to do, right?

So many shows but this production is really fun to perform. I try and make every show a little different (nothing big or distracting) to keep things fresh and keep everyone on their toes!

Do you have any special routines or good luck needs before a show?

Nothing specific, but I do love running around to all my cast mates’ dressing stations and showing some love to them before the show. Having a strong relationship with your cast helps the show feel like you’re playing a game with them for 90min.

What’s your favourite thing about the holidays?

I LOVE stuffing my face with turkey and ham and spending time with the people I care about! Plus sweater weather equals cuddling and who doesn’t love to cuddle?

Lexy Baeza, who stars as Rudolph, has always known she wanted to be a stage actor after seeing her first live stage production: Annie. Only five years old, she soon began auditioning and performing in children’s theatre productions within the year. She remembers her first show as if it was only yesterday, performing in Anne of Green Gables alongside Broadway actress (who was 13 at the time) Krysta Rodriguez.

Lexy is thrilled to be returning the show and cast as Rudolph in the musical based on the CBS television classic. She won the role not only because of her experience and talent, but because she was able to emulate Rudolph’s voice better than anyone else.