You are here: Home / Entertainment / Why Do White Disney Princesses Make More Money?

While we won’t be seeing another Disney princess of colour until 2018 when Moana, the Polynesian princess, makes her debut, it seems that we really aren’t seeing that much of the Disney princesses that aren’t, well, white.

The graphic below, created by Jody Sieradzki of Dadaviz, measures each Disney Princess side-by-side based on their total sales on eBay since May 2013. The data was then organized based on skin and hair colour which demonstrated a not-so-surprising trend — Princesses that had lighter skin and hair had higher sales.

Elsa and Anna have the unfair advantage thanks to the universal popularity of Frozen. But even when you take them out of the equation, the statement still holds true: Princesses’ with lighter skin and hair sold better than Princesses of colour. Cinderella, Snow White, Rapuzel and Ariel topped the chart while Jasmine and Tiana fell to the bottom.

Shocking? Not in the slightest. It’s no secret that the white Barbie sells better than the black one, so it’s no surprise that similar results can be found when comparing the sales of Disney Princesses. In fact, in a 2009 study of 121 girls, many associated being a Princess with having lighter skin. So in this case, that could theoretically translate into girls’ preference for Disney dolls with fair skin.

But there’s also a whole other side to this story, as an article from Sploid says, perhaps the success in sales has nothing to do with how these Princesses look,  but everything to do with the success of the movies themselves. While we don’t have the exact numbers, Frozen is the top grossing animated film of all time. And as Sploid points out, Cindrella and Snow White are “more imprinted in pop culture” than any other Princess, which could also be the reason behind their higher revenue.

So does the colour of these Princesses’ skin and hair really affect merchandise sales? Or can higher sales be attributed to the success of the film? You be the judge. 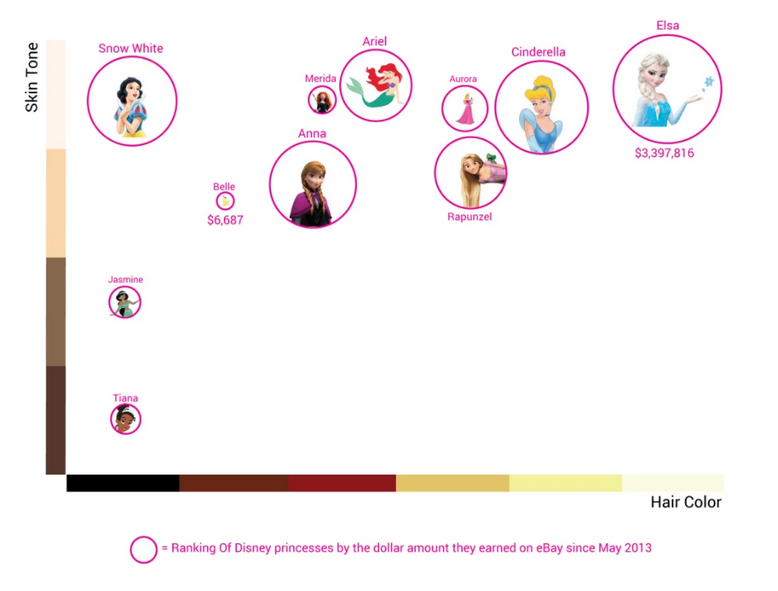