You are here: Home / Entertainment / Puppet Up! Uncensored – It Ain’t the Muppets!

When I first experienced a taste of PUPPET UP! – UNCENSORED I immediately thought, “Oh the muppets are back!” Only they ARE NOT the Muppets I grew up with. They are sassy, brassy and downright hilarious! And, by the way, please kindly refer to them as puppets… not Muppets.

PUPPET UP! – UNCENSORED is where the art of puppetry and the world of spontaneous comedy collide. It is a wildly creative and highly entertaining stage show that includes improvisation by some very clever and talented actors. Created by the award-winning director, producer, and writer Brian Henson the show features The Jim Henson Company’s puppeteers. The Miskreant Puppets, as Henson Alternative has dubbed them, are the stars of the show; Patrick Bristow serves as host, and the Musical Director is Willie Etra.

“When the cameras weren’t on, this was the kind of fun he and the puppeteers really had,” said Brian

The show is never the same. Based on audience participation the cast of six expert puppeteers improvise songs and storylines on the fly. The production also delivers two shows in one with all the action skillfully projected onto large screens while the puppeteers display their skills in full view of the audience. A rare opportunity to see how the mechanics of the show is produced while it’s being performed –  but you never know which way the story will go! Audience members are sometimes brought into the act on stage and perform along side with the puppeteers. This is a whole lotta fun to watch! 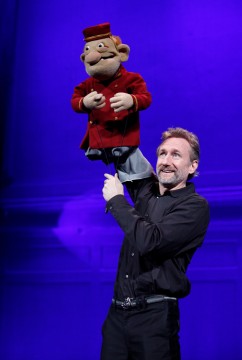 Brian mentioned that he grew up watching his dad on-set with all the puppeteers, “When the cameras weren’t on, this was the kind of fun he and the puppeteers really had,” said Brian, “it was naughty adult-content off screen that was all ad-libbed an uncensored and naturally funny. He had a wicked sense of humour.”

So, now I have a whole new outlook on Miss Piggy and Kermit the Frog.

But this show isn’t for kids and you won’t see those well-known TV muppets! The bunch of puppets in the show are from The Jim Henson Company but they have a wild side. “We’ve been upfront in telling people that since the show is improvised you never know what could happen! The content is adult driven,” said Brian, “but it’s the parent’s discretion ultimately. If you think your kid is mature enough to handle it… or get it, then it’s up to you.”

This one-of-a-kind comedy made for grown-ups is touring after its successful Off-Broadway run in New York where it had drawn rave reviews. PUPPET UP! – UNCENSORED will be playing in Toronto, October 22 to November 3, 2013 at the Panasonic Theatre, 651 Yonge St.. 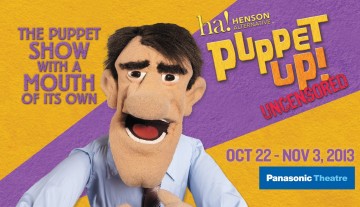