So, it’s generally pretty much agreed upon by everybody that babies don’t really know what they are doing. It’s their defence for kicking, hitting, biting, hair-pulling, throwing, screaming and other fun baby activities.

If you Google “empathy in children,” most of the science stuff says empathy and compassion are gradually built throughout childhood, beginning around the age of two.

It seems nine-month-old Samantha’s daycare provider didn’t bother Googling it before he/she wrote this note to the baby’s mother Vero.

Samantha has been playing roughly and aggressively with the other babies; they will be crying and upset but she is smiling and enjoying herself — even our using firm voices to tell her it’s not OK to hurt her friends and remove her from area, she is smiling and going right back. Can you help us out by maybe discouraging her to not play roughly with her friends and her dog. 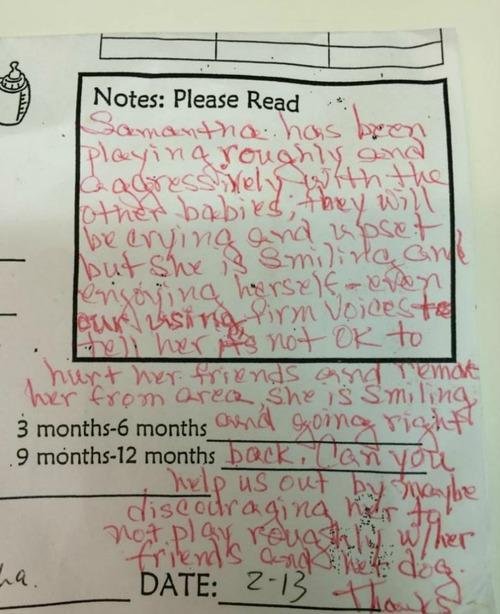 Vero, who was upset by the note to a Facebook group for working moms, asking others to weigh in.

This brought on a lot of parents sharing their stories about their children being forced to comply with rules not suitable little people who cannot fully understand the concept of a rule. One mom says her 10-month-old son was kicked out of their mommy and me class because he took a lady’s wallet out of her diaper bag. When his mom returned it to the woman, the class enforced their “zero tolerance for theft policy” on the infant.

Seems a bit extreme to us. I mean really at nine and ten months, can you really enforce a zero tolerance policy on a child? We aren’t advocating for throwing the rules out the window—kids sure learn boundaries from a young age—but shouldn’t a bit of leniency and tolerance be shown?