You are here: Home / Entertainment / Of Punctuation and Pedantry
Share this...

Good grammar memes. We’ve all seen them peppering our social media feeds, mocking the slightly less literate (or, perhaps, simply the slightly less careful) with their affect vs. effect,  grocer’s apostrophes, semicolons, and the Oxford comma. (Heh: see what I did there?) 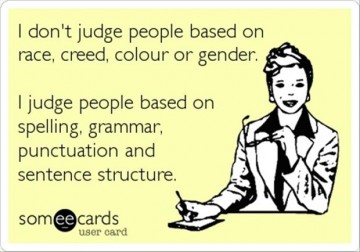 I’ll admit it — I usually love these memes. I know a little bit about grammar (and punctuation and spelling and usage…they really are distinct after all), and it bothers me when people get it wrong. But I’m quirky like that; I guess I just feel that if a thing is worth doing, then it’s worth doing well. If you’re going to write, you should endeavour to do it right.

So when I see a funny grammar meme, it tends to make me feel smart and well-educated because I get it. I know the difference between less and fewer and I know that the Oxford comma is an optional comma after the word ‘and’ at the end of a list. (And in case you care, there’s no right or wrong; it’s kind of a love it or hate it thing.)

But there’s a part of me that wonders, do I like these memes for a less palatable reason? Do I — perhaps — like them because they make me feel superior? Probably. Come on now…be honest: don’t we all like to feel superior to the hoi polloi* from time to time?

British humourist Stephen Fry (whom I greatly admire) has an opinion on this sense of linguistic superiority; he calls it pedantry.

Have I become a language pedant? I think it’s a worthwhile question. The ultimate goal of language is, after all, to communicate. If someone says, “irregardless of the weather, we’re going camping this weekend” is their meaning any less clear to me? No. I know very well that they mean they will go camping this weekend regardless of the weather. Does it really matter that they got it wrong?

If you’re going to write, you should endeavour to do it right.

Language is a living, organic thing that changes and evolves over time. For heaven’s sake: the word “selfie” was included in the Oxford English Dictionary (the Bible of English language geeks) this year!

For me it’s an ongoing an internal struggle. I know Stephen Fry is right. Our language is changing right before our very eyes and I don’t want to be the old fuddy-duddy waving my metaphorical cane at the linguistic rule-breakers of the world.

I don’t want to be a language pedant.

On the other hand, I can’t help mentally captioning this kickass scene from BBC’s Sherlock:

What about you? Where do you sit? Are you a rule-breaking writer with little regard for conventions or do you agonize over every hyphen and em-dash?

*I know the correct usage is ‘hoi polloi’ without the definite article ‘the’, but I think ‘the hoi polloi’ reads better, so there.

“Stop making that noise, it makes me want to throw squirrels.” The sound of crackling plastic was driving my husband to the point of rodent … END_OF_DOCUMENT_TOKEN_TO_BE_REPLACED

Summer used to be magical. The hot weather, the outdoor adventures, the complete and total lack of responsibility. School was over for the year and … END_OF_DOCUMENT_TOKEN_TO_BE_REPLACED