You are here: Home / Entertainment / Kinky Boots Musical Has Us Hot On Our Heels!

If you think it’s hot outside, darling, then you should check out the off-the-charts sizzle on stage at Kinky Boots! The musical created by dream team Harvey Fierstein, Cyndi Lauper and Jerry Mitchell is now playing at the Royal Alexandra Theatre, in Toronto with Mirvish Productions.

The story (that was first made into a film) is based on a real life shoe manufacturer who tried to save his failing business by making shoes for drag queens. In this Canadian stage production, we meet Charlie Price as a young boy with his father envisioning his son to take over the family business one day. We also meet young Simon, who’s dad is a boxing champion with expectations of his son becoming the same or at least giving him the skill-set. Flash forward to adulthood and the two men meet as fate would have it. 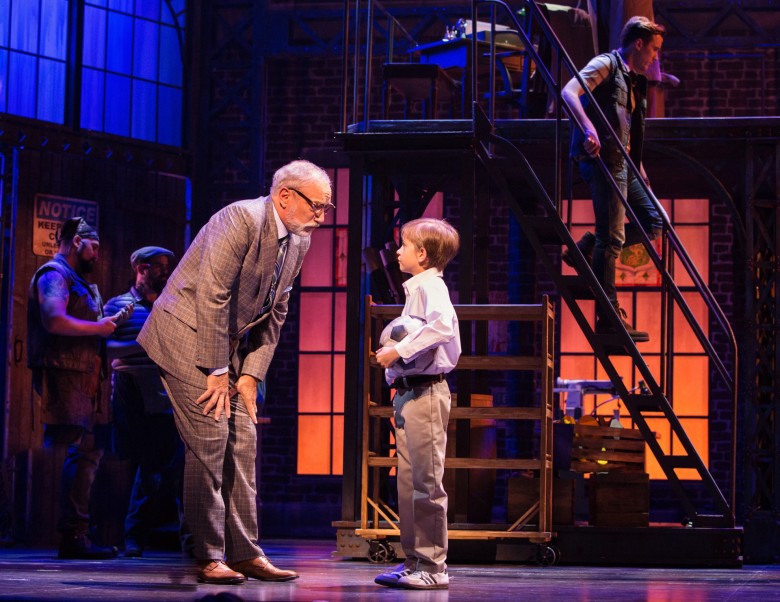 Charlie reluctantly takes over the family shoe business without interest and plans to shut it down firing the staff who he’s known all his life. But what he had quickly realized through some sensibility of an employee is that there is more at stake than just shoes. Although well made, the current shoes cannot compete on the market of imports pricing and design. He stumbles across Lola, a drag queen who inspires him to take the family business in a whole different direction. Charlie is played by home town boy Graham Scott Fleming (Elmvale, Ontario)with his first major role and is getting absolute rave reviews for his role. But I will also tell you that the night we had attended,  Justin Stadnyk stepped in just as comfortably into those awesome shoes nailing songs including “The Soul of a Man.”

Now let’s talk about Lola. Because we ALL want to talk about Lola! We LOVE LOVE LOVE Lola. Alan Mingo Jr. plays this vibrant character with boundless energy and is absolute perfection in 6-inch heels. You feel all his…er, her, heart and soul in this production. His show stopping song “Hold Me in Your Heart” is powerful and deeply felt. But all the songs are very strong! Did I mention Cyndi Lauper is involved here? And the cast had a blast on stage entertaining us. You absolutely feel their love and affection. When they finish off with “Raise You Up/Just Be” you will leave with an extra skip in your step.

I had taken my reluctant 10 year old to see this musical and he loved it. “Is it about shoes?” he asked me rolling his eyes before we arrived. LOL. The messages here go beyond how shoes tell you a lot about a person. Being who you ought to be and not who people tell you to be is an important message that resonates with everyone these days. Accepting people for who they are is another strong message. A real confidence and self-esteem boost here!

And in Oscar Wilde’s words “Be yourself; everyone else is already taken.”

We’ve fallen head over heels for this production of Kinky Boots and it even warrants a revisit!

Visit mirvish.com for schedule and ticket information. Matinees also available. You’ll want to get to the theatre a little earlier than show time to take a pic with the giant red Kinky Boots that are outside of the theatre and makes you visit the basement for another photo opp!

UPDATE: Due to very popular, like crazy popular demand, Kinky Boots is now extended until March 6, 2016 !