You are here: Home / Entertainment / Kids Make A Difference & Playgrounds Come To Life In TVOKids’ Giver

I know most kids like to help out in their community. It gives them a sense of pride and accomplishment as well as an understanding that they are very much part of the “village”. I was introduced last year to a great show called GIVER that airs on TVOKids. The show follows kids who volunteer their time, energy and enthusiasm to transform playgrounds in their local Ontario communities, while learning new skills along the way. In each episode, a team of 6 kids work alongside contractor and host Michael Lagimodiere, helping to dig, paint and hammer away towards their new local playground. The show was developed to help school-aged kids adopt a ‘can do’ attitude and hopes to inspire kids to help their own community.

Season 3 is now airing as they visit 10 new communities across Ontario to build customized parks. 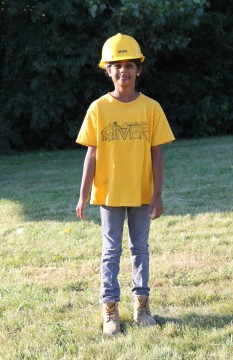 I had a chance to ask one of the kid volunteers, Shrithicka, age 10, who helped build the Etobicoke playground about what her experience was like working along side her friends and what she learned.

What was the most fun part about helping to build this park?

I got to use tools that I have never heard of.

What was the most challenging part about building this park?

Probably raking all of the woodchips that we dumped onto the base of the playground platform, since it is a big park. We needed a lot of our volunteers to help us rake it.

What have you learned about helping a charity?

I learned that we are building the park not just to go on TV, but to also have a new park for kids to play in.

What feelings did you have when the park was completed and the community saw it all done?

I had a happy feeling when the park was finished because all the kids can now play at the new Giver T-Rex park.

What would you want to tell other kids about the show to encourage them to watch?

Kids should watch the show because they might want to be a builder or a park designer when they grow up. They can get ideas by watching the show so in the future, when they get the job, they will get ideas like the T-Rex park.

Over the course of 3 seasons, Giver has built over 30 parks across Ontario, teaching kids how to make a difference through helping out their community. This TVOKids original series airs exclusively on TVO and TVOKids.com. You can see which parks have been transformed in this new season on the following dates…

In case you’ve missed any, all episodes will be available at tvokids.com following broadcast dates.

Here’s a sneak peek of what to expect!