You are here: Home / Entertainment / Kafka’s Metamorphosis Transformed on Stage
Share this...

You may have read the book in university or have seen various adaptations of the story either on screen or on stage. Metamorphosis is an interesting story that was written by Franz Kafka in 1915 about an ordinary family who has their lives completely change when their son turns into a insect. Sound familiar?

It’s a story about unusual family circumstances and unthinkable sadness. In this stage production, Mirvish brings a classic with a twist and one that has your mind reeling from start to end.

His complex and impersonal stories are so unique that his name inspired an adjective – kafkaesque.

The play starts with an uneventful morning of routine for the Samsa family. Like clockwork, each family member goes about their motions until son Gregor awakes transformed into an unsightly creature. Confusion sets as Gregor cannot communicate other than with screeching noises. The family is horrified and cannot cope with this unsightly reality.

You would think that a mother always has an affection for her child no matter what the circumstances but in Kafka’s story the struggle between a mother’s love and the inability to cope is heartbreaking. It makes you realize that not everyone in the world is strong enough for whatever reason.

The story ends in strange tragedy when the son is driving by starvation and the unwillingness to live. The family moves forward with fresh eyes just like a new spring day.

While the story is not new to the stage this particular production has your nerves on edge as Gregor (Bjorn Thors) spends most of his time on stage crawling on the walls and suspended in all different directions taking on the characteristics of a bug on the wall!

I had taken my 14 year old son to see Metamorphosis as he has an affection for other crawly things. I like to give him opportunities to think outside the box and I wanted to see his reaction to the story. I knew he was mature enough to think things through. While on the subway home his questions started. He’s that sort of kid where he takes a few minutes to absorb and then we have this incredible conversation. 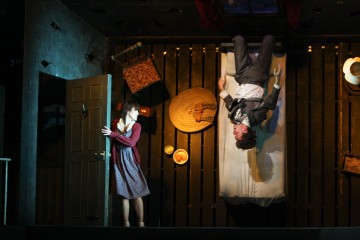 Me: “Of course, don’t even question that!”

Exposing him to a classic theatre production (with an unusual twist) like Metamorphosis is a great opportunity to expand his thinking and to stretch his imagination. I wanted to expose him to the feelings and emotions of theatre. I’ve taken him to big splashy productions but bringing him to a play that is so raw like this one is another experience. He noticed that the stage set didn’t change. He noticed that language used and the harshness of voices. He now has seen the side of theatre that is not only about entertaining but about making one think.

This hugely acclaimed production of Metamorphosis was created and premiered in 2006 at the prestigious Lyric Hammersmith in London. It received rave reviews and has been revived twice since, due to popular demand, in 2008 and again in 2013. Created by renowned British playwriter and director David Farr (Associate Diretcor of Royal Shakespeare Company) and actor/director Gisli Orn Gardarsson, of the award-winning Icelandic theatre company Vesturport.

Metamorphosis is on stage at the Royal Alexandra Theatre (Toronto) until March 9, 2014.

The Metamorphosis (excerpt from book)

“As Gregor Samsa awoke one morning from uneasy dreams he found himself transformed in his bed into a gigantic insect. He was laying on his hard, as it were armor-plated, back and when he lifted his head a little he could see his domelike brown belly divided into stiff arched segments on top of which the bed quilt could hardly keep in position and was about to slide off completely. His numerous legs, which were pitifully thin compared to the rest of his bulk, waved helplessly before his eyes.”

“Stop making that noise, it makes me want to throw squirrels.” The sound of crackling plastic was driving my husband to the point of rodent … END_OF_DOCUMENT_TOKEN_TO_BE_REPLACED

Summer used to be magical. The hot weather, the outdoor adventures, the complete and total lack of responsibility. School was over for the year and … END_OF_DOCUMENT_TOKEN_TO_BE_REPLACED