You are here: Home / Entertainment / Is your kid a rock star? 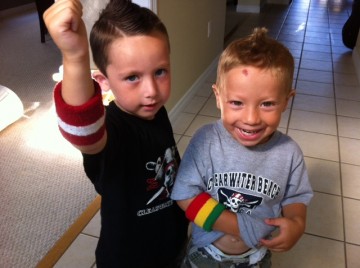 There is always music going on in my house. When you marry a Cape Bretoner that sort of thing tends to happen. I always heard about “Kitchen Parties” and now we have one every weekend. I gotta say, I love it. It typically gets started when my wife is on the fiddle and I’m on the booze. Fortunately, it looks like the music gene has been passed down to our 2 boys. My eldest boy Travis loves singing and dancing, he reminds me of a very, very, very young Mick Jagger, and my wee-man Rory absolutely loves the guitar. The kids not even 3 and he knows more cords than I do. Heck, even I’ve been known to pound on the drum kit from time to time. Look out Osmond’s we’re coming for ya!

All jokes aside, whether they continue on their love of music or whether it eventually passes, it really is a lot of fun. When it comes to being good to the soul, I think music is right up there with sports and napping.

As a guy that works at a classic rock radio station, I can’t tell you how many youngsters I meet who wail on the guitar to Zeppelin or AC/DC. It’s such a wonderful thing to see and hear. With that being said, I thought I’d share this very cool idea with ya’ll in case you have a kid that loves music.

I work at Q107 and one of the many privileges is that I get to work in the same building with Canadian Rock legend Kim Mitchell. Kim is putting together a new band and he needs your help. If you think you have a future rock star on your hands, show us what they’ve got and submit a video of your kid playing ‘Rock & Roll Duty;. We need a guitarist, bassist, keyboard player, drummer and vocalist. Five of the most talented little rock stars will be selected to join the “Kid” Mitchell Band and perform “Rock & Roll Duty” live on-air on Q107. The “Kid” Mitchell Band is going to rock out, in concert with Long & McQuade Musical Instruments.

The only rule is that kids must be 14 and under.
Like I said, I know there are a lot of talented kids out there and I wanted to share it with you. Who knows? Maybe your kid will be sharing the stage with Kim.

On a side note, here is a video I took of my kids a few months ago. We’re always singing songs around the house and I guess they picked up on me singing, coincidentally, ‘Rock & Roll Duty’. I heard their version, grabbed my phone and walked into this…