You are here: Home / Entertainment / How The Junos And MusiCounts Support Music & Kids

We can’t wait for the Juno Awards airing live on Sunday, March 15 from Hamilton’s FirstOntario Centre. The event will celebrate the country’s most talented music performers in a star-studded line up. The Canadian Academy of Recording Arts and Sciences (CARAS) has announced that the 2015 Canadian Music Hall of Fame Inductee Alanis Morissette, deadmau5, Lights, and Sam Roberts Band will be performing on stage during the awards show.

But a few us are aware of the year-long charity initiative that is part of the Junos. MusiCounts is helping to keep music alive in schools across Canada by offering grants including the TD Community Music Grants , Teacher of the Year Award, scholarships and other music eduction initiatives. Their mission is to ensure that children in Canada, regardless of socio-economic circumstances or cultural background, have access to a music program through their school.

We also have a chance to give to this worthy cause. Superstar LIGHTS has partnered up with Menchie’s and on March 11, 2015, 20% of all sales at all locations will be donated to MusiCounts. And if you’re in Toronto, LIGHTS will be making a special appearance at the Menchie’s location at 865 York Mills Road to meet with fans.

I’m eyeing the limited edition flavour in ‘Up We Dough’ inspired by LIGHTS’ hit song ‘Up We Go’. 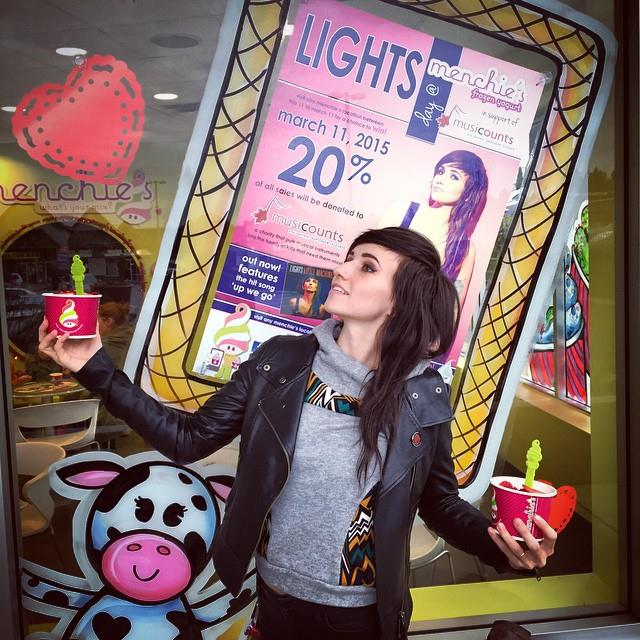