You are here: Home / Entertainment / From Rockstar To Dad: John-Angus MacDonald Of The Trews

The Trews has a very interesting story. Like many hard working bands they had very humble beginnings. They formed while in high school in Nova Scotia under the original name Trouser and then in early summer of 2002 the band entered Rocksearch—an annual talent search with rock radio station HTZ-FM in St. Catharines, Ontario… and they won!

To date, they’ve released five albums with the most recent titled “The Trews”  reaching #1 on the Rock, Alternative and Independent Album Charts and #3 on the overall chart in Canada. During the final stretch of their most recent Canadian tour, we had a chance to catch up with John-Angus MacDonald, guitarist and founding member of the The Trews to see how life is going especially now that he’s a dad!

Congratulations on your most recent tour! Rise in the Wake? Where did that come from?

Thanks! The opening track on our CD is called Rise in the Wake and we thought it had the best ring to for our tour.

And for this tour we wanted to do something special for the Massey Hall performance. So we did two sets—it was something we wanted to do. The Electric and Acoustic sets were really interesting and we did it a few times before to see how it would go.  It gave us the opportunity to pull out some rare songs and give a different flow to it.  So, I’m really happy.

Have you played Massey Hall before?

I’ve been there with other acts but we’ve never landed there ourselves. I think it’s one of the better sounding venues in Toronto. I’ve been there to see a lot of shows over the years. The sound is great and the sightlines are great . You can feel the history of the room and it’s a more intimate setting. 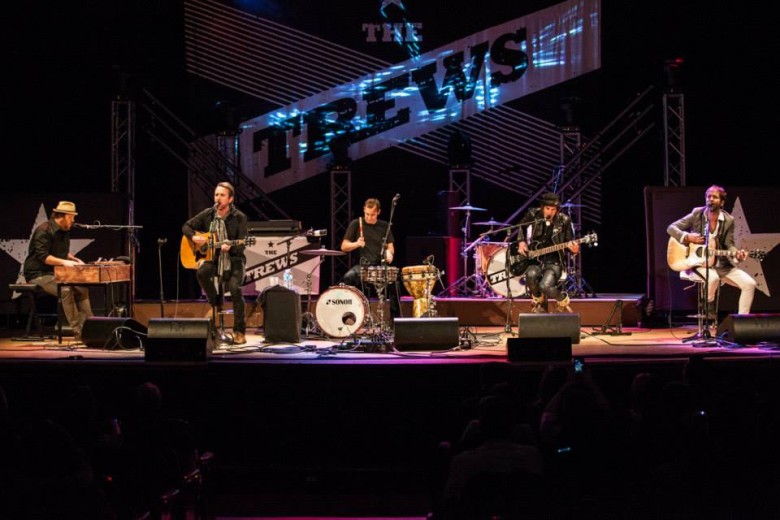 Your song “Highway of Heroes” is pretty emotional.

It’s one of those things with that song. It was written about a woman who fought the war in Afghanistan. She was from our hometown in Nova Scotia. We knew her and went to high school with her. She was the first female to die in that conflict. When something like that happens it really rocks the community to the core. We felt that reprocussion even though we are living there any more. We wrote the song hoping to inspire people with her and her story. We released it in between records and we thought we would donate all the proceeds to  the Canadian Hero Fund. We wanted to be helping a tragedy but didn’t want any personal gain from it. But it was written about something very specific.  What shocked us was that this song was embraced by the military and the family. We get messages from all over the world from people we don’t know who feel affected by the song. We’re always humbled by the affect it has on people.

Is Toronto now home base for the band?

Yeah, pretty much. I’ve been in Toronto for about 10 years. We had a baby recently so we just recently bought a house just outside of the city with a more relaxed vibe.

Does your little guy go on the road with you?

Yeah, so far he’s been to New York City, L.A.,  the west coast and across Canada with us. He’s well-travelled for his age.

Even though your son is young, what is your winter highlight when you’re with the family?

Well, he experienced his first snowfall recently so that was pretty neat to see!

Simple things like that we don’t really think about until we have a kid, then it’s like a renewed experience as a parent.

What’s the best thing about being a dad (so far) for you?

It’s being witness to all that. You’re watching this life that you helped create and he just evolves everyday. It’s pretty humbling and awe-inspiring. It’s amazing, you know?  I don’t know if everyone feels this way, but when you have a kid everything seems to have more meaning. It gives your work more meaning. Everyday you feel more deeply.

I agree! I just told a friend of mine, who just had a baby, “now you’ll experience how much you’re capable of love. I never thought that I could love this much. It’s a completely different level.” Pretty sappy..I know.

Yeah, I think love is like an unlimited resource – it’s there and available as much as you want to tap into and with kids there’s just a deeper expression of love.

We’ve been out on tour with a band called Glorious Sons. Their stuff is great.  I like the Zombies – they’re totally retro but I love their stuff. AC/DC is always good for a hit of energy.

Be sure to check out Highway of Heroes by The Trews